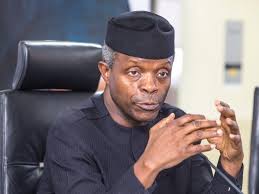 The 113 Chibok schoolgirls still in Boko Haram’s custody will be released “very soon.”

Acting President Yemi Osinbajo gave the assurance, yesterday, when he received members of the Bring Back Our Girls (BBOG) movement at the Presidential Villa in Abuja.

The sect released 82 of the girls in May, in a prisoner-swap deal with the Federal Government, and 21 were let go in October 2016.

But since then, little has been heard from the Federal Government concerning the 113 still being held by the insurgents.

Osinbajo, who was represented by Babafemi Ojudu, Special Assistant to President Muhammadu Buhari on Political Matters, said government’s silence was only strategic.

He reassured the group that government had been meeting with service chiefs concerning the abducted girls as well as others in Boko Haram custody, and that efforts were being intensified to secure their release.

“I’ve been directed by the acting president to assure you of the support of the government concerning your agitation for the return of all the girls that were kidnapped by members of Boko Haram,” Ojudu said.

“He said he heard you loud and clear. On the issue of the policewomen that are being held and even concerning the girls, on a daily basis, the acting president has been meeting with security chiefs and making contacts with negotiators across the world, who have helped in the past to secure those that have been released.

“We have not, at any point, forgotten the children who could be anybody’s children. The acting president has asked me to reassure you, this afternoon, that he is with you, and that your cries are his cries.

“And the fact that we are not coming out to say what is being done is strategic and, also, for security reasons. He also said I should tell you that very soon, more of the girls, if not all of them, will be brought back home.

Oby Ezekwesili, co-convener of the BBOG had urged the government to restrategise its anti-terrorism approach to ensure that all the girls, as well as the policewomen and oil workers abducted by the sect are released.

“We thought the government had figured a way to get back our girls, so we estimated that the remaining 113 would return in lesser time it took the 82 to come home.

“If only one voice remains, that would continue to demand the release of our Chibok girls, it is good enough. It’s enough to re-echo our voice across the universe,” she said.

Meanwhile, the acting president charged governors of all states controlled by the ruling the All Progressive Congress (APC) to think out of the box in meeting up with social welfare of the people. Osinbajo, who stated this yesterday in Birnin Kebbi during a parley with Progressive Governors’ Forum, noted that the present administration promised better life for Nigerians and urged them to deliver on it.

“That is why in the budget, we have N500 billion for social welfare. If States think out of the box, like Lagos, Kebbi, Jigawa and other States who used their initiatives, we can improve their lives.”

Osinbajo noted that APC States must support the Federal  Government to fight corruption which he described as an endemic disease.

“If we don’t killed corruption, corruption will kill us, ” he said.