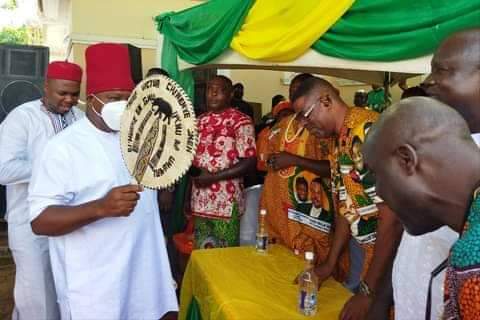 About a fortnight ago, Distinguished Senator Victor Umeh played host to the front line APGA gubernatorial aspirant, Prof Chukwuma Soludo in his palatial residence at Aguluzigbo in Anaocha LGA of Anambra State.

During that epochmaking event which drew the presence high powered government officials and party leaders across the length and breadth of the state, the former National Chairman of APGA and immediate past senator that represented Anambra Central Senatorial district, Senator Dr Victor Umeh (Oahamdike Ndi Igbo) expressed satisfaction and confidence in the ability, capacity and reach of Prof Soludo to win for APGA the next governorship election and therefore publicly announce his unalloyed support for his aspiration. He said ” we are not interested in who wins primary election and fail general election; our interest is on who has the wherewithal to win both primary and main election for APGA”

This singular action of Senator Umeh attracted so many appraisals from political scholars and commentators. There were different interpretations from different people. Some members of APGA took offense alleging that Senator Umeh shouldn’t have openly endorsed an aspirant above others. Some maintained that he has the right to endorse any aspirant of his choice. It was more serious in the camp of opposition parties in Anambra State. There was so much unrest amongst the opposition camps in the state and they demanded for Ohamadike’s head. Well, the political Jagaban was never deterred by the numerous interpretations that was given to his decision.

As if that was not enough, just yesterday, Enugu- Ukwu town in Njikoka LGA of Anambra State was “hot” following Rt Hon Dozie Nwankwo’ s endorsement of Prof Chukwuma Soludo.

Today, Hon Dr Ibezi Ifeanyichukwu (Ochiagha Idemili) will be playing host to Prof Chukwuma Soludo where he intends to do what Ohamadike did. He will publicly endorse Soludo for the ticket of APGA ahead of Nov 6 guber election in Anambra state

A number of political leaders in the state have indicated interest to replicate what Ohamadike did. How else can someone define capacity and influence? Senator Dr Victor Umeh is indeed a political ijele.

While speaking both at Baby Awka and Onye Ndozi’s residence, Ekwueme Enugwu-Ukwu na Umu Nri blamed political ignorance as the reason why some APGA members are not comfortable with his decision to pitch tent with Soludo. According to him, ” what an elderly man sees while sitting down may not be seen by the young ones even when they climb a tree”. He however advised Facebook politicians to shun public castigation of our political leaders on social media platforms as that will adversely hurt their political future.

The highlight of yesterday event at Rt Hon Dozie Nwankowo’s residence was when Distinguished Senator Victor Umeh reconciled with Hon Chief Benjamin C Obidigwe (Aka Oma Jide). During his speech, Ohamadike said ” Akaoma, I was not happy with you but because of this Soludo project, I’ve forgiven you”. With deep smiles in his face, Akaoma stood up, walked up to Senator Umeh and gave him a warm embrace. Ohamadike tapped his back and said softly ‘ it is well with you “.

My dear readers, there’s no gainsaying that APGA is a cooperative movement. It is more determined than ever to retain self in Agu Awka and further provide excellent and service driven leadership to Ndi Anambra.