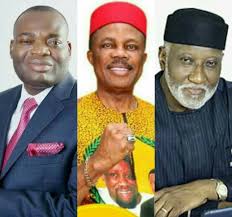 The final push for votes has begun among 37 political parties and their candidates, with just seven days left in Anambra State governorship election campaign. The most anticipated election of the year is down to the last week.

The next few days offer the candidates the final chance to perfect what needs to be done to swing the race in their favour.

With the November 18 finish line in sight, candidates know it is the last chance they have to touch the hearts of the electorate and try to help the ones that are undecided make their decisions fast – the contestants will hope to get the electorate to go to the polling stations and cast their votes for them.

By now, contestants must have told the people what they will do for them, why they wish to lead, why they should be voted into office, among other things. The electorate should know what each of the contestants has on the menu for the state if voted in.

In the run-up to the election, so far, the residents of Anambra have witnessed many rallies, interactions with politicians and heard lots of promises through the print and electronic media.

A major political campaign tool is the manifesto of the candidate, which is a public declaration of policy and aims, which the candidate and his party intend to implement when voted into office.

But over the years, politicians have failed to implement their campaign promises and this has made the people lose interest in manifestos. Out of the candidates contesting the election, only a few have shown evidence of articulated manifestos. Some of the media aides to the candidates stopped answering calls from Saturday PUNCH when it had become obvious that their principals had no manifestos to present to the electorate.

An Awka-based legal practitioner, Mr. Okoli Akilika, however, described the increasing disuse of manifesto as an aberration, saying “it is a social contract between the person to be elected and the electorate.”

“It is the manifesto that will make people hold leaders accountable so that they are able to ask: have you done what you promised to do?” He added.

Be that as it may, there are five contestants generally considered as the strongest candidates in the race, including incumbent Governor Willie Obiano, who have all promised to improve the lives of the people.

For instance, one of them, Godwin Ezeemo of the Progressive Peoples Alliance, had said he would focus on “security, health, agriculture, power, education,” which he had termed as SHAPE.

Osita Chidoka of the United Progressives Party promised to run a transparent, community-based and all-inclusive system, where institutions of government in all critical sectors would run efficiently for the desired quality of life for all citizens and residents.

Similarly, Dr. Tony Nwoye of the All Progressives Congress said his administration would focus on security, infrastructural development, job creation and attracting investments from local and foreign investors.

And Obiano, the current governor of the state and the candidate of the All Progressives Grand Alliance, had put emphasis on “continuity,” saying he would continue to improve on security, education, infrastructure, health care delivery and so on.

However, political analysts in the state had predicted a three-way race among the incumbent, Obiano; the PDP’s Obaze; and the APC’s Nwoye. The power of incumbency is on the side of Obiano, while it is believed that Obaze and Nwoye will offer a strong competition by virtue of the strength of the PDP and the APC – the two biggest parties in the country.

Also, according to analysts, beyond the usual rhetoric, Anambra people want a leader that will be ready to get down to business and deliver on promises made.

For example, to a community leader in Ogbunka, Orumba Local Government Area of the state, Col. Chuba Ikeagwu (retd.), the most important quality a leader must have is to be able to provide “good governance for his people.”

Similarly, a former councillor and Editor-in-Chief of Fides Newspaper, which is owned by the Awka Diocese of the Catholic Church, Jude Atupulazi, noted that the people of the state were in need of a visionary leader who could take the state higher.

“So we are looking for a candidate that will not disappoint us or take us back. We have not reached our destination but we hope that with a good candidate, we will get there,” he said.

One factor that will play a big role in the election, as identified by analysts, is zoning, which is the rotation of political positions to different geographical regions within the state.

Since the reemergence of democracy in Nigeria, which signalled the beginning of the Fourth Republic, Anambra North, of the three senatorial districts in the state, has been the unluckiest.

However, Obiano has been the only governor produced by Anambra North and the general sentiment in the state is that the zone should be allowed to complete two terms, even if it won’t be the incumbent that gets to do so.

The candidates for the three main contending parties are from Anambra North. This underscores the value they have placed on zoning, with the hope that the strategy will allow their candidates gain more credence in the public.

Confirming the situation, a hopeful Ikeagwu, who is from Anambra South, said he was in support of having someone from Anambra North as governor for another four years so that the position could move to his zone by 2023.

He said, “In Anambra, we have been using rotation. Central finished its turn and it is now in the North and we want the North to complete eight years; then, power will move to the South where I belong. So there are internal issues in Anambra.

“Except one of the parties that got its candidate from Anambra Central, other candidates are from the North, including the candidate of the APC and the PDP.”

Money is also expected to play a major role in the election. Although Section 91 of the Electoral Act 2010 as amended, provides that a governorship candidate can append a maximum amount of N200m, analysts in the state are of the opinion that the law has been grossly abused by the candidates.

For instance, Akilika alleged that one of the candidates bought 326 shuttle buses for each of his party’s ward chairmen while blaming the Independent National Electoral Commission for failing to ensure candidates did not go against the law.

Akilika said, “You cannot divorce money from politics; but legally, the electoral act has pegged the amount a political party can spend in any election. But it appears that INEC is ill-equipped to implement the law. So I call on INEC to ensure that the law is complied with.

“How can you explain a candidate buying shuttle buses for 326 ward chairmen in a state? It is obnoxious. We don’t know about the ones he bought for hangers-on and so on, we are talking about the ones that are in public domain.”

Ikeagwu, who also lamented the situation, called for more public sensitisation on the matter.

“There are other people sharing money, so we are trying to reduce money politics drastically in the state. Most of the money being shared is stolen wealth. People can collect such money but on Saturday, they should go out and vote for good governance and their conscience,” he said.

However, Atupulazi noted that the Anambra people were becoming more enlightened and therefore shunning money politics for good governance, saying, “Money will still exchange hands but I think that the majority will still vote in line with their conscience. It has been happening for some time here and that is why we have been able to have good candidates in the state.”

All in all, the public discourse in the state has been centred on whether to go for continuity come next Saturday or to opt for change. But while some have yet to make up their minds, others have already made their decisions.

For instance, Ikeagwu, whose money was on continuity, said, “The campaigns have been calm and peaceful, but there have been the promises and vituperation from politicians, saying they would do this and that – the usual political talks. But the normal parlance is that ‘the devil you know is better than the angel you don’t know.’

“Obiano is building Umueri International Cargo Airport, security in Anambra is very good, workers are not being owed salaries and he is also improving on other sectors.”

But Akilika, who countered Ikeagwu, was of the opinion that some of the achievements attributed to the governor had come at a huge cost to the public.

He said, “Yes, he bought vehicles for the police and took some other sundry actions on security, but he did that at a highly questionable cost to the state. The previous government bought vehicles and did so many things and the cost was barely N360m. But the governor inflated the cost of maintaining security in the state to N1bn, which was unwarranted. We are not happy about that.

“The previous administration operated a very lean government. But a situation where a governor has over 1,000 aides and so on is unprecedented in the political history of the state. It is unthinkable, unwarranted. People are suffering from the high cost of governance.

“Within two years of his governance, Anambra moved from stable state to a borrowing state. The question is that even if there was the need to borrow, what does he have to show for it? This a state where the governor opted to build an airport city project near his hometown.”

But whatever decisions are made by residents of Anambra next Saturday, it is the hope of political analysts that the outcome of the election will be in the best interest of the state and its people.