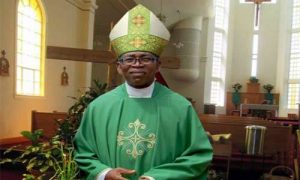 Barely four days after some youths attacked Catholic bishop of Owerri Diocese, Archbishop Obinna, for criticising the Imo State government during a funeral service, more prominent sons of the state have joined their voices in condemning the incident.

At a requiem mass in honour of the mother of the Pro-chancellor of Imo State University, Mr. Alex Mbata, at Saint Michael’s Catholic Church, Ngwoma-Obube in the Owerri North Local Government Area, Imo State, some irate youth, angry that Archbishop Obinna condemned attempt to impose a governor on Imo State, hurled insults at him, snatching the microphone.

In his reaction, Senator Ifeanyi Araraume condemned, in strong terms, the incident, describing it as sacrilegious. He called on the relevant authorities to ensure that the perpetrators of the ‘heinous’ crime were brought to book.

In a statement signed by the Director of Media and Publicity of Senator Araraume Destiny Organisation, Chief Kingsley Ufere, Araraume said:

“We like to state unequivocally that this act is totally unacceptable, condemnable and reprehensible. The perpetrators of this heinous offence should be brought to answer to the law. Our politicians should realise a place of worship and sanctuary of God is a revered place and not a place for gangsterism, political rascality and cult activities.

“The person of Archbishop Obinna is a highly respected man of God and a senior citizen of our state. He should be treated with all measures of respect and dignity that he and his office deserve.”

Araraume, who is a governorship aspirant on the platform of the All Progressives Congress (APC), disassociated the ruling party from the ugly incident.

“The leadership of the party at the state and national levels condemns this act in its entirety. Once more, we call on well meaning members of the public, especially our youths to shun all acts of violence and should not allow themselves to be used as thugs to carry out anti-social vices,” he said.

Also, a governorship aspirant under the banner of the All Progressives Grand Alliance (APGA), Mr. Okey Ezeh, has condemned the attack on Bishop Obinna. He said the incident was not only an affront to Christians everywhere, but also a complete desecration of an institution of God.

In a  statement in Owerri, the management consultant and devout Catholic bemoaned the erosion of moral and religious values in the state and regretted that “those in high places in the state have rather chosen to aid and abet this anomie instead of address it.”

Ezeh said: “The archbishop, as a man chosen by God to herd his flock, has it both as a responsibility and an obligation to speak the truth to power when the people are oppressed, and must never be persecuted for doing so.”

He added that the suffering wrought on the people by the Okorocha administration has become unprecedented. He alleged that Imo State has been so poorly managed and plunged into debt crisis and unemployment dung pit by this administration, cautioning:“The way out is neither by hushing and harassing the messenger of God nor intimidating critics, but, by the failed administration quickly preparing their handover note.”

Ezeh called on the people of Imo to put their trust in God and realise that the signs of an end to their plight are now clearer, while enjoining the Church in the state to keep praying for the archbishop, who he described as, one of the biggest blessings of God to His people in the state.

The Imo State government has said Archbishop Obinna was not manhandled, while condemning attempt to link Okorocha’s son-in-law with it.

“The Archbishop personally told The Guardian Newspaper of Monday March 5, 2018, that he was “Neither beaten nor manhandled by any person.” And we have, therefore, no other option than to leave the matter at that point. Since the archbishop is at the centre of the whole drama, his account should be the most authentic. And we take it up from there.”

The state government alleged attempt to blackmail Uche Nwosu, asking:  Why is Uche Nwosu the hottest political figure in the state today? Why do they not talk about the possible candidates of other political parties. Why has Nwosu become hot cake everyone wants to buy? That is where the pendulum or compass is pointing at. And Imo people have bought into the whole thing. That is why it has become an issue even at the pulpit.”