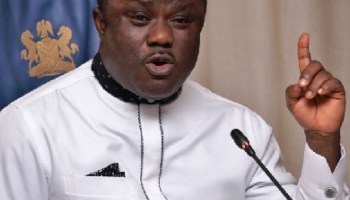 CALABAR —GOVERNOR of Cross River State, Ben Ayade, yesterday, made history as the first governor to propose a trillion naira budget in the country when he laid a budget estimate of N1.306 trillion before the state house of assembly for the 2018 fiscal year. Before now, Lagos State held the record with its 2017 N812 billion budget and is expected to hit the one trillion mark this year. However, Lagos State is yet to present its 2018 budget. Governor Ben Ayade The Ayade move is reminiscent of a similar move made by elder statesman, Alhaji Lateef Jakande, when as governor of Lagos State in the Second Republic, he presented a budget of N1 billion for Lagos State, the first time a state government was hitting N1 billion budget. Christened “Budget of Kinetic Crystallisation,”

Ayade said the budget is to crystalise all the efforts and vision that have been put into developing the state since he assumed office in 2015 and to move it from a civil service economy to an entrepreneurial economy. The governor said 70 per cent of the budget will be for Capital Expenditure while 30 per cent will be for Recurrent Expenditure. He said though the money is not readily available, it is expected that with the approval and commencement of signature projects, foreign investors are expected to bring in funds that will be used to fund the budget. He said the dredging of the sea for the construction of the state’s Deep Sea Port would gulp N82 billion while the super highway, which will serve as an evacuation corridor for the Deep Sea Port will be split into 50 kilometres stretches to make it convenient for investors to construct selected units on a Build, Operate and Transfer, BOT, basis. He announced that a N6 billion Social welfare scheme has been introduced to meet the needs of the people, particularly the aged who cannot work or earn any income. He said security will cost the state N15 billion in 2018, power supply N250 billion, cottage industry N12 billion, uniforms for primary school children N3 billion and N2.8 billion to support the Federal Government’s school feeding programme in the state. Ayade said: “The hallmark of this administration is the decoupling of the state from over dependence on federal allocation and so this budget is designed and tailored to fit our dreams of an enterprising economy without depending on oil as a source of revenue.” The governor, who said his administration had not borrowed a kobo since he assumed office told the assembly members that the envelop style budgeting where the state based its annual expenditure on revenue and incomes for the year is old fashioned stating that he has introduced a budgeting style which he calls strategic budgeting which focuses on the things the state sets to achieve even without the monetary backing but has the strong will to actualise its dreams. Ayade who announced the payment of December salary while presenting the budget stated that the Paris Club Refund the state has received could only pay the salaries for seven months but he has adopted a unique funding style to consistently pay salaries every month. He called on the Federal Government to allow the state explore and exploits its vast oil deposit found in different parts of the state to compensate it for the loss of 76 oil wells for which the state finances have been negatively impacted.