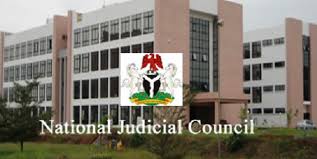 BREAKING!!! Confusion At NJC Meeting Over Who Presides, Justice Bode Rhodes Walked Out

The emergency meeting of NJC did not kick start on a smooth note on Tuesday, January 29 (today) morning as there was confusion over who should preside over the meeting.

The meeting was called via a message sent on Sunday, January 27 by the National Judicial Council (NJC) director of information, Soji Oye, who apologised for the short notice.

It was to start at 10am inside the National Judicial Council (NJC) conference room.

As formerly reported by our Reporter, neither the suspended Chief Justice of Nigeria (CJN), Justice Walter Onnoghen nor acting Chief Justice of Nigeria, Justice Ibrahim Tanko Muhammad, the man appointed to act in his position, will attend the National Judicial Council (NJC) meeting which was called to resolve the leadership crisis in the judicial arm.

Bode Rhodes-Vivour, who is currently the third most senior justice at the supreme court, is not a member of NJC but was invited by the secretary, Ahmad Gambo Saleh.

Rhodes-Vivour was immediately ushered out politely when he entered the conference room.