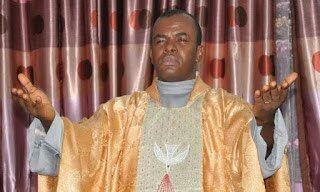 The popular Catholic Priest based in Enugu State, Reverend Father Ejike Mbaka said he never prophesied that Governor Emeka Ihedioha will lose at the Supreme Court.

Father Mbaka who spoke to Nigerian Telegraph on the Phone said his new year prophesy was based on HOPE FOR IMO STATE.
« I never said Governor Emeka Ihedioha will lose at the Supreme Court, I only prophesied Hope for Imo State. God said Imo State is on the rise and that there’s hope for Imo State. Why not watch the video of the New Year Prophecy and stop believing what the social media is saying ».
The New year prophecy has generated mixed reaction across the State as the Supreme Court is set to deliver judgment in the gubernatorial case involving Governor Emeka Ihedioha and Sen. Hope Uzodimma.