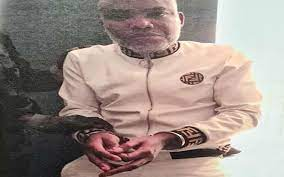 The family of Nnamdi Kanu has narrated how the leader of the Indigenous Peoples of Biafra (IPOB) was ‘unlawfully’ arrested in Kenya.

The Nigerian government had on Tuesday announced Kanu’s arrest and extradition to Nigeria to continue to face trial.

He was subsequently arraigned with a blindfold before Binta Nyako, a Judge of the Federal High Court in Abuja.

Kanu is facing charges bordering on treasonable felony instituted against him at the court in response to years of campaign for the independent Republic of Biafra through IPOB.

He was granted bail in April 2017 for health reasons but skipped bail after flouting some of the conditions given to him by the court.

In a statement on Wednesday, Nnamdi Kanu’s younger brother, Emmanuel Kanu said he was unlawfully arrested in Kenya, detained and was subsequently extracted from the country to Nigeria where he is now detained.

“Whilst visiting Kenya, Nnamdi Kanu was detained and handed over to the Nigerian authorities who then flew him to Nigeria.

“My brother has been subjected to extraordinary rendition by Kenya and Nigeria. They have violated the most basic principles of the rule of law. Extraordinary rendition is one of the most serious crimes states can commit. Both Nigeria and Kenya must be held to account. I demand justice for my brother, Nnamdi Kanu.”

“Nnamdi Kanu holds both British and Nigerian citizenship. Nnamdi Kanu is Biafran, not Nigerian. He has rejected his Nigerian citizenship.“The British High Commission in Nigeria must insist upon my brother’s immediate release. They must guarantee his safety and security. Nnamdi Kanu must be returned home to the UK to his wife and his sons who live here. The Foreign Secretary, Dominic Raab, must make clear to the Nigerian authorities that they will not tolerate the unlawful detention of British citizens and that the UK Government condemns the Nigerians and Kenyans for undermining the rule of law. Foreign Secretary Raab must be clear.

“There will be consequences for those who resort to extraordinary rendition. The British Government must insist upon justice for Nnamdi Kanu,” he added.

On Tuesday, it was reported that Kanu was extradited from an African country.

“He was not arrested in London or anywhere in the United Kingdom. Diplomats confirmed that Kanu was picked up somewhere in Africa. The family and IPOB are very unhappy. Apparently, they have known about the trailing and arrest for some time,” he had said