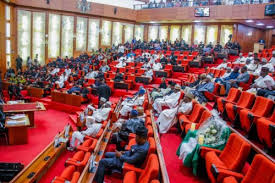 Ondo State Governor, Oluwarotimi Akeredolu on Wednesday, backed the call for the country to return to sthe use of the 1963 Constitution.

Governor Akeredolu spoke while declaring open the Zonal Public hearing of the review of the 1999 Constitution held at the Cultural and International Event Centre, Akure.

Akeredolu stated that the powers of the federal government must be trimmed down as it was the major friction in the country and politics of bitterness.

He warned that the current attempt at the Constitution amendment should be taken beyond the usual jamboree conceived and executed to arrive at predetermined result.

The Ondo Governor said the 1963 Constitution which reflected the Republican status of the country remained the best document for a country as heterogeneous as Nigeria.

He said it was the best practicable guide towards nationhood but was abolished by the military by imposing a unitary system on the country.

According to him, “The current exercise, therefore, must not toe the path of the previous attempts at tokenism. The basic law of any country must not be reduced to frivolities reflecting preferred whimsies. It must not be oppressive of the minorities. Its provisions must indeed give teeth to the primary purpose for which the government exists. No provision of the law must not be justiciable as Chapter Two of the current 1999 Constitution seeks to impress on us.

“All the agitations of the peoples of this country must be looked into with a view to improving the economic power of the average citizens. The best way possible is to allow each region to function in its areas of comparative advantage. The behemoth called the Federal Government must shed the excess weight unduly appropriated over time. It is the major cause of friction. It is the reason for the politics of bitterness. It explains why everyone wants the power at the centre. It promotes ethnic chauvinists and encourages mediocrity.

“The new law must view, critically, the current misnomer which sees the Federal Government appropriating humongous amounts for moribund agencies whose duties overlap with those of the states. The fiscal policy of the country must be restructured to encourage ingenuity and uncommon resourcefulness. The Federal Government should only coordinate and receive royalties. The current system is not sustainable. All of us are beginning to appreciate this fact.

“The current exercise will derive its legitimacy if taken to the people for revalidation. Nothing must be taken for granted. Everyone must be treated as an equal partner in this whole enterprise of nation-building.”

“No patriotic citizen can deny the fact that the country faces dire challenges at the moment which, in themselves, bear the necessary ingredients for redefinition, determination, growth and eventual development. The movement towards social integration must be steady and focused.”

Ondo Governor, Oluwarotimi Akeredolu, has told youths he could not afford to lie to the electorates on his achievements and the actual situation of things under his administration. Akeredolu said promises by political opponents to reduce tuition fees in the state-owned tertiary institutions were meant to deceive the people. Akeredolu,…

Delta State Government on Wednesday said it had not received from the Federal Government the 4.2 million pounds returned by the United Kingdom. It said that although the Accountant-General of the Federation, Mr. Ahmed Idris, had disclosed on Tuesday before the House of Representatives Committee on Recovered Assets, in Abuja, that the funds had been released to the state, the money had not arrived in its coffers.

The government, however, said in a statement by Mr. Olisa Ifeajika, Chief Press Secretary to Governor Ifeanyi Okowa, in Asaba, that it was in contact with the Federal Government, especially the Office of the Attorney-General of the Federation, on the issue.

It expressed appreciation for the disposition of the Federal Government in releasing the funds to the state and assured that it would acknowledge receipt of the funds when it arrives. The government also assured the Federal Government and Deltans that the funds would, in tandem with Governor Ifeanyi Okowa’s administration’s hallmark, be judiciously deployed especially in the completion of projects it had earlier intimated the Presidency about.

Governor Ifeanyi Ugwuanyi of Enugu State has declared his administration’s support for amendments in the constitution of Nigeria that will enhance the nation’s unity and prosperity “in an environment where justice, fairness and equity shall prevail”.

Gov. Ugwuanyi made the declaration while declaring open the zonal public hearing of the Senate Committee on the Review of the 1999 Constitution of the Federal Republic of Nigeria, as amended, holding in Enugu, for Enugu, Anambra and Ebonyi states.

The governor who harped on the importance of unity and prosperity in an atmosphere of justice, fairness and equity, therefore enjoined all relevant Institutions, Civil Society Organizations, Stakeholders and entire Enugu State citizenry to avail themselves the opportunity of the zonal public hearing to participate in the national conversation.

While welcoming and extending his greetings to the Senators present at the event, Gov. Ugwuanyi wished them “a very successful zonal public hearing on the proposed alteration of some of the provisions of 1999 Constitution of Federal Republic of Nigeria, as amended.”

He further noted: “I particularly acknowledge the leader of the team and Senator representing Enugu West Senatorial District in the 9th Senate of the Federal Republic of Nigeria, Distinguished Senator Prof. Ike Ekweremadu, CFR. I also recognize in a special way, Distinguished Senator Chuka Utazi who represents me and the people of Enugu North Senatorial District in the Red Chamber of the National Assembly.

Earlier in his welcome address, the Deputy Senator of the Senate, Senator Ovie Omo-Agege disclosed the Senate decided to adopt a bottom-up approach by first listening to Nigerians at the geo-political level before the National Public Hearing because of “the critical importance the Constitution Review Committee places on the subnational levels of governance in Nigeria.”

Also in the address, presented on his behalf by Senator Ike Ekweremadu, Senator Ome-Agege revealed that topical issues like Judicial and Electoral Reforms, Local Government Autonomy and devolution of powers are prominent in the agenda to be addressed in the constitutional amendments.

The Deputy President of the Senate, who is the Chairman, Senate Committee on Constitutional Review, stressed that “If we get those items through constitutional processes of alteration successfully then our Constitutional Democracy will be set on the right pedestal, and ultimately, Nigeria will take its pride of place among the enviable constitutional democracies in the world”.

The lawmaker pointed out that “this ongoing review provides a platform for the good people of Nigeria to express their opinions on the fundamental law that governs our lives through proposals that will lead to the highest good for the greatest number of our people”.

Stressing that the focus of the Committee is how to manage the review exercise in a fair, inclusive, credible and transparent manner in view of “diverse and differing views on the different themes of the exercise”, Senator Omo-Agege noted that they have already received a lot of memoranda on a broad range of issues and proposals.

“Fellow Nigerians, distinguished ladies and gentlemen, I wish to assure you most sincerely, that the memoranda you have already submitted and those that may come forward arising from this hearing and all the deliberations and engagements that will come forth from them will be the lodestar of our work as a Committee”, he said.

Speaking on behalf of his colleagues from Enugu, Anambra and Ebonyi states, the Speaker of the Enugu State House of Assembly, Rt. Hon. Edward Ubosi assured the people of South East geo-political zone that the state legislature will first seek their opinions before adopting the outcome of the constitutional review by the National Assembly.

The Speaker who maintained that constitution alteration is a continuous exercise, commended the 9th National Assembly for taking up the task again, and thanked Gov. Ugwuanyi for providing the enabling atmosphere for the event.

Hon. Ubosi urged the Senate Committee to fast-track the process so that the aim of the exercise will be achieved before the end of the present administration.

In his vote of thanks, Senator Ekweremadu, also applauded Gov. Ugwuanyi, who he described as “Insurance Guru”, for his immense contributions towards the hosting of the zonal public hearing in Enugu.

“I want to thank you (Ugwuanyi) especially for making this possible and in putting this arrangement together, in putting South East together. In fact as far as the other Senators are concerned, we are sure that this is one of the best across the nation”, he declared.