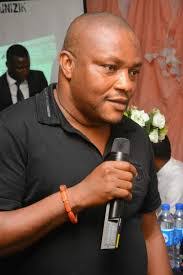 The conduct atrocities of the present central Government of Nigeria using the Nigerian Army and its immediate past Chief of Army Staff, Retired Lt Gen Tukur Yusuf Buratai took another shameless and cowardly dimension in the afternoon of Thursday being yesterday, 25th Feb 2021 along Suleja-Bida Road in Niger State when Barrister Richie Ebuka Okoroafor, a British citizen of Igbo nativity and international human rights lawyer narrowly but divinely escaped assassination by suspected Government assassins. The Nigerian Government conduct atrocity perpetrators now seem to have shifted from hiring “human rights contractors” and paid ‘columnists’ and ‘writers’ to attempts at violently taking away the precious lives of critics and activists justly, pricelessly and conscientiously exposing their atrocities perpetrated in service.

The Abia State-born British Lawyer broke the sad news to Intersociety and Government of the United Kingdom yesterday evening hours after recovering from shocks associated with the assassination attempt. The attempted assassination had taken place along Suleja-Bida Road when he was returning to Abuja after visiting the Alpha Base, manned by soldiers and belonging to the Joint Security Taskforce or JTF in Niger State. His visit to the temporary Army Base followed new discovery of another batch of 109 Obigbo Army abductees including Citizen Elvis Ngozi whom his family recently located to the Base through an Army officer contacted by the Family. Barrister Okoroafor had before leaving the Base noticed that his private car had been marked with a black paint in the rim marked after he had parked the car and entered the Base.

Conscious of that fact and believing in God Almighty and the taintless spirits of those violently departed by the named perpetrators for divine protection, Lawyer Okoroafor entered his car and drove for about 20 minutes from the Base returning to Abuja when his car was crossed and blocked by an unmarked white Hilux with some armed men who opened fire instantly and at close. His car was rained with live bullets including aiming and shooting at driver’s and car owner’s sides. The Lawyer took a back reverse and managed to find his way into a market place, forcing the assassins to speed off and escape. The Lawyer was driving in a black Mercedes Car (GLK M133 Model). The matter was later reported to the Nigeria Police Force, Suleja Area Command in Niger State. The British Government also responded swiftly and offered to evacuate the Lawyer who is of British citizenship back to UK subject to his approval.

Why They Want Barrister Okoroafor Assassinated

Apart from exposing the secret trial and execution of six Igbo Christian soldiers who were secretly executed on 24th Jan 2021 at the instruction of then Chief of Army Staff, Lt Gen Tukur Yusuf Buratai (as he then was), Barrister Okoroafor, also jointly with others located not less than 370 out of over 400 defenseless Obigbo residents abducted between Oct and Nov 2020 by Nigerian Army under the leadership of the same Tukur Buratai. The abductions followed a war-grade invasion and attacks by Nigerian Army on Obigbo and environs during which 102 defenseless civilians were killed and 120 others shot and injured. Out of the over 400 Obigbo abductees, 208 have been freed by Courts and names of 162 others including 53 girls and young women located. The judicial release of the 208 abductees was achieved through the dogged efforts of the Lawyer and other lawyers working with him. Though Lt Gen Buratai was asked to retire on 26th Jan 2021 by Nigerian Government but he was un-popularly made an “ambassador” despite stiff local and international oppositions and criticisms over his terribly poor human rights records.

It is almost an act of impossibility for the assassination attempt not to have arisen from the Nigerian Army and the camp of its immediate past Chief of Staff, Retired Lt Gen Tukur Buratai, and by extension, the Government of Nigeria. This is also owing to the fact that the ex Army chief is now a diplomatic employee of the same Government of Nigeria that appointed him Army Chief on 13th July 2015.

According to a criminological analysis done in the instant case by Emeka Umeagbalasi: “Barrister Okoroafor is a young lawyer with rising local and international reputation but he is new in Nigerian social lifestyles or its political murky waters to warrant enmity of such terminal proportion; therefore the surest and inescapable point of strong suspicion is rested in the doorsteps of the Nigerian Army and its immediate Chief of Staff, Retired Lt Gen Tukur Buratai. In this instance, the latter is the first or most suspected of the suspected. The Lawyer, as a matter of fact, has told me more than three times that he is being marked, tracked and trailed by suspected agents of the Nigerian Government since Nov 2020 when he rescued the first batch of 52 Obigbo abductees in Niger State.

Therefore, although Gov Nyesom Wike was vicariously involved in the massacre and abductions but his desperation and panics are most likely not have gone beyond the boundaries of Obigbo and Rivers State. The other accused person/entity (Army and its ex COAS) are considered more desperate and mean and may have decided to “travel” the Barrister and potential others so as to prevent further exposition of the untold stories of the Obigbo Army atrocities or for purpose of preventing international embarrassments and sanctions against the newly appointed non-career ambassador(s) (i.e. ex Army Chief). Looking at the circumstances and patterns of the assassination attempt, too, there are strong suggestive of the fact that the assassins are likely the serving members of the “Special Assignment” squad of the Nigerian Army or DSS.

Attached are the pictures of Barrister Richie Ebuka Okoroafor’s Mercedes Car riddled with bullets and some expended cartridges recovered from the scene of the attempted assassination.

For: International Society for Civil Liberties & Rule of Law