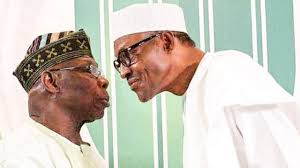 Former President Olusegun Obasanjo, has described as ridiculous, rumour that President Muhammadu Buhari had died and was cloned by somebody else from Sudan.

Obasanjo said the rumour became popular through the abuse of the social media, expressing surprises that many Nigerians believed the lies.

The former President explained in a video, how he was approached by a very important person, who asked him about the truth about Buhari’s rumoured death.

According to him, the person told him that the information had gone viral on the social media.

The Balogun Owu wondered how Buhari could have died and be replaced with someone from Sudan without him knowing about it.

“Somebody came to me, a very high hub person, saying tell me about this talk of Buhari not being Buhari.

“I said ‘do you believe them?’ He said, ‘well, it is in the social media’. I said ‘how will Buhari die and we will not know that Buhari has died and they will bring us somebody from Sudan to be Buhari?’

“It’s ridiculous to the extreme. But you have it in the social media and you see people believing it,” Obasanjo expressed concern.

While accepting the fact that the social media is good, Obasanjo, however, regretted that it is being abused.

He advocated teaching the youths and the children about the dangers inherent in abusing the social media.

“Social media is good, but it can be abused. We have to train our youths and our children about the dangers of the social media,” he submitted.

Mazi Nnamdi Kanu, leader of the Indigenous People of Biafra (IPOB) has repeatedly insisted that President Buhari was Dead and being impersonated by a masked wearing look-alike, Jubril from Sudan.