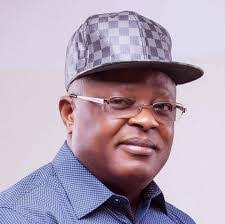 Ambitions are legitimate desires, that push people to achieve their dreams. Humanity may be Hopeless without it. However, I am inclined this morning to look at the current news emanating from Ebonyi State, and the vaulting ambition of Gov Dave Umahi; someone I really never took to heart because from beginning of his joining PDP, I saw a man filled with Political greed.

His experience from being Chairman of PDP when he just entered the party, left me wondering in those days, to the fight he had with his former boss, Elechi Amadi, the immediate past Governor of Ebonyi State. PDP has not only been gracious to Gov Dave Umahi, the party made his Political career…I am dumbfounded to see his current swaggering and promiscuous mendacity with APC, now making all of look like fools.

He is in his right to pursue his “ambition”, no matter how he goes about it, but he should mind the words that “those who live in Glass Houses don’t throw stones”! I know that many people don’t see any difference with Parties, but I do, seriously. There are things that I have seen since APC took over the reigns of power in Nigeria, especially with a character like Buhari, I never saw during the days of PDP.

From President Obasanjo, to Yar’dua, (when he had his full faculties working), to Jonathan, I saw a party determined to genuinely improve the state of Nigerians, and created policies to enhance the well-being of Nigerians on a general level.

There may be few personal fights that may have resulted in Political fiscuffs, but they are generally isolated, and not a norm or dragged on for long to affect the quality of governance.

Religious Islamic tribal superiority is being displayed with impunity, while lives no more matter to the authorities of the State. People are bucthered with such alacrity, and nothing is being done by this APC regime about it.

If not by Boko Haram, which is now being pampered by the State, it’s Fulani terrorists herdsmen, who derive their powers from the inner sanctorum of the Presidential Villa, to the State Security agencies who mow the citizens down on the flimsiest of excuses. This became so bad that the youths of this country, in their millions, defying personal security, organized the most effective anti Government protest ever; *#ENDSARS*! Yet this APC Regime shamelessly organised the state Security agencies to massacre innocent Nigerians who are displaying genuine anger against state sponsored terrorism against them. This is the worst display of insensitivity and wickedness by any regime ever, in Nigeria’s History.

And today the state is unrelentingly pursuing with venom those they perceived as the leaders of *#ENDSARS! What is this, Nigerians? How can a Government “elected” to *provide security and welfare* for it’s citizens become the albatross and the Achilles’s heel of the same citizens they are meant to protect. Some prominent members of this cabalistic regime have died, and their deaths are attributed to the Covid 19 pandemic! Covid 19 pandemic? Are you kidding me! What we heard as the dying confessions of Abba Kyari is still freightening to me. I know they are true because one saw all those things being displayed. My worry is not those who believe in the righteousness of their jihadist mission, but my problem is why do people cheer these heartless wicked souls on as they display such unparalleled wickedness on the citizens they are meant to protect?

Party matters, and Nigerians should be very careful and understand that all that glitters is not gold. Let’s not be blinded or deceived that all the parties are the same. They are not. And the Peoples of this country have demonstrated their preference for PDP at all times. What happens is that the State apparatus are deployed to thwart the will of the people. I saw it in Ondo recently, in Kano, in Osun, in Katsina, and in the last Presidential election. I hail Nigerians and urge us, especially the people of Ebonyi State not to be carried away by the nascist disloyalty of Gov Umahi to PDP who is about throwing away the wish of Ebonyians away on the alter of a recklessness ambition. He should realize that evil never lasts forever! I hope he prayerfully re-traces his steps, before *ekene agafee nku aka*!

I urge the people of Anambra State, never to lose sight of these things as 2021 comes into view. Very soon, they will come to “seize” the State. Let’s look before we leap.