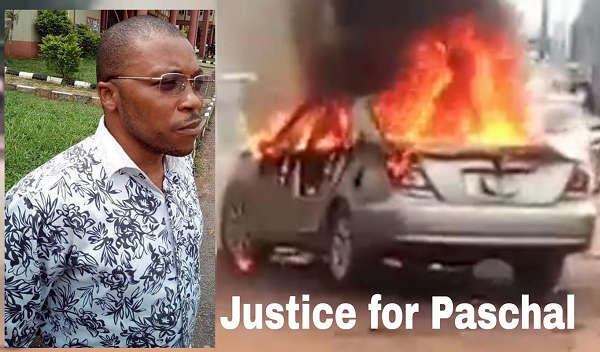 Owner of the car burnt in Umuoji and brandished attempted kidnap by disgruntled political elements has finally been revealed but after his unjust death.

You probably may have seen the spine chilling and heart wrenching videos being shared on WhatsApp. In one of the videos, a car is shown being burning. In another, a lying murderous member of a certain political party could be heard claiming that the person being beaten to stupor by an irate mob he must have whipped into a frenzy was allegedly sent by Distinguished Senator Victor Umeh to kidnap some kids for ritual purpose. This is a vicious and wicked lie from the pit of hell.

I have had to speak to a few individuals to actually ascertain what transpired. I chose not to watch any of the videos after Dan, a colleague in government sent me the picture of the young man who suffered this unfortunate fate.

His name is Paschal, a native of Ekwulobia and he is known to all of us in government. He operates music and sound equipments and is the person that sets up sound at most government functions in Anambra State.

I never knew that he suffered such a wicked fate until yesterday (Monday, February 4, 2019) when a colleague, the baritone voiced Chido Obidiegwu paid me a visit in the office and pleaded that we help change the narrative of Paschal’s unfortunate death. He said that we must let the world know what happened.

Those that murdered him has spun the web of lies that he was a kidnapper. Paschal a kidnapper? Then the Pope must be a nun.

I have spoken to a few individuals to ascertain what happened. Paschal was actually on his way to Obosi for an assignment, to set up for an event. He had in his vehicle some of his equipment.

However on getting to Umuoji, some young school children knowingly or accidentally threw stones at his passing vehicle and caused some damage. He then alighted from the vehicle to accost the kids that caused such malicious damage.

The young school children that caused the damage all ran away except for one that wasn’t so lucky. Paschal held him and requested that he leads him to his parents. He had the intention of demanding for the repairs of his damaged vehicle from them.

Meanwhile the kids that has escaped earlier ran to some elders in the community and raised a false alarm that a certain man had ‘kidnapped’ one of them.

They obviously did not disclose fully what had transpired. The men quickly mobilised and confronted Paschal. They didn’t give him a chance to explain himself and pounced on him beating him black and blue.

By the time help came, Paschal was already unconscious and he was taken to Iyi-Enu Hospital, Ogidi. He did survive an emergency surgery but gave up the ghost days later from the injuries sustained from the mob action.

Anambra Police is already in on this matter. I am not able to ascertain if they have been able to apprehend the person whose voice could be heard in the video falsely alleging that Paschal was a kidnapper sent to kidnap kids for ritual purposes.

The police needs to do this so that Pachal may not die in vain. The world should not forget Pascal.

The author can be contacted via uchenworah@yahoo.com

DISCLAIMER: Opinion articles are solely the responsibility of the author and does not necessarily reflect the views of the publishers of Elombah News