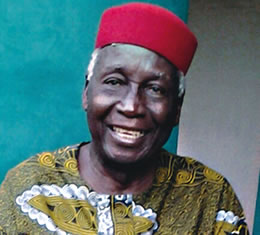 Convener of South East Elders Forum and former President General of Ohaneze Ndigbo, Dr Dozie Ikedife has justified Igbo’s ceaseless cry of marginalization as nothing in concrete terms has been done to address the issues. He insisted that any group in Nigeria has the right to self-determination through legal and diplomatic channels. He faulted the recent claim by a delegation from the United Nations that came to canvass for one Nigeria.

He put a big question mark on the authenticity of the delegation, saying that their mission should be disregarded. He also talked about former vice-president Atiku Abubakar defecting from the All Progressives Congress (APC) to the Peoples Democratic Party (PDP). He said it is too early to judge the former Vice President of Nigeria by his action “because you are not sure if he has finished jumping. Are you sure he will not jump back to APC?” Dr Ikedife addressed other issues of national importance.

It appears that President Muhammadu Buhari administration has begun to beam its developmental searchlight on the Igbo nation, building roads and other infrastructure. Can that appease the Igbo and stop them from crying about marginalization?

You said he has started. Well, when we see that we will then believe. Even if it is in the budget, we have not yet seen the execution. That notwithstanding, if there is something like that in practical terms, then nobody will cry of marginalization. So long as there is evidence of neglect people will continue to cry of marginalization. It is a legitimate cry.

If a section of a country is not given the needed attention as given to other components, it cannot but cry of marginalization. Marginalization means you think that something is due to you but you don’t get it. Or you are systematically excluded from having what you are supposed to get as if you are nobody. Patronages and amenities are not equally distributed. That cry has given impetus for self-determination. And that cry for self-determination will not die unless what leads to it is addressed. If you have an ulcer, it is painful and you will continue to cry until the ulcer is healed. That is the simple analogy.

Are the Igbo the only people marginalized in Nigeria?

The Supreme Council of Elders of Indigenous People of Biafra (SCEIPOB) where you serve as deputy chairman is in court with the Federal Government through Billie  Human Right Initiative over Biafra self-determination. How far has this gone?

Well, the matter is still in Federal High Court, Owerri Imo State. And it is left for the court to determine our right to self-determination. From the United Nations pronouncement which is adopted by the African Union (AU) and by extension Nigeria, it is declared that any ethnic group who so wishes has the right to self-determination. That right cannot be terminated arbitrarily.

The issue there is, how do you go about it without infringing on the law. Billie Human Right Initiative took the Federal Government of Nigeria to court seeking to know whether the people in Biafra land have the right or not to seek self-determination. The SCEIPOB is pursuing it legally, politically, diplomatically and through discussions within the framework of the law of the land. And you can see that other parts of the world are doing it.

You will recall  the size of the Soviet Union, from there, about eleven countries have come out. Yugoslavia broke away, Czechoslovakia broke away and some others. Britain has left the European Union after being a strong member. Scotland sought to be on her own from the United Kingdom, and so on. It is the universally accepted right of any group to seek to be on its own. There was a case like that in Spain and many other countries.

We have outgrown the era of enslavement and colonization, the era of Berlin Conference when Africa was shared and dominated by the European countries. Not anymore.

People should be allowed self-determination. It is a fundamental right. Time is changing. We should realize that the time of domination and enslavement whether you like it or not is gone. Don’t forget that democracy is all about if you are allowed to rule me. If I don’t want you to rule me, it can’t be by force. I will voluntarily allow you to rule me, not that you conquered me. That should be the position. That time of gunboat diplomacy is gone for good. Let people realize it, that you have no right to be ruling me if I don’t want it.

A UN delegation visited Ohaneze Ndigbo recently canvassing for one Nigeria. How do you look at that?

That claim of a visit from the office of the Secretary General of the UN is not substantiated. Somebody claimed that he came from the UN, Muslim from Ghana who perhaps works at the UN Secretariat. He came and said that bla bla bla for us to be one Nigeria. I say to him who the hell is he to tell us where we will belong to? We, who are wearing the shoes know where they pinch us. He has no right to make that statement. What he said was almost bordering on irresponsibility. And I do not expect a responsible organization like the UN to make such a weighty statement without hearing from both sides. I even doubt the authenticity of the man’s claim of who he is.

Why did Alaigbo Development Foundation and South East Elders Forum not long ago travel to US to petition UN and US Congress over Biafra?

We made the petition when the Igbo living in the North were given quit notice, when it was still changing. The truth is that we agree that living in a big country like Nigeria has many advantages, but if insecurity to life and property cannot be guaranteed, it is far better to be alive and live in a small country. If the waves of unprovoked killing of our people in the Northern part of our country, if pillaging and sacking of villages with destruction of farm crops in Igbo land by the so-called Fulani herdsmen, who still do nomadic cattle rearing, if sacking peaceful Igbo people and businesses in the Northern Nigeria is our lot, then we are far better off living in a separate smaller country called Biafra. We take consolation in a United Nations Act which allows for self-determination for ethnic nationalities, who so wishes to do so, peacefully.

Now on 2019. Will Alhaji Atiku Abubakar’s return to PDP affect APC’s chances to remain at the centre in 2019?

Well, Atiku Abubakar moves round. Perhaps, he has not permanently landed. Or has he? Are you sure he is not going to move again. We should wait until he has permanently become a member of either APC or PDP before we can assess the situation.

PDP may not be happy welcoming him because he has been jumping from party A to party B. He is a man who is pursuing an objective, to be the President of this country. He is looking for locus standi so that he can use that platform to actualize his ambition.

Should President Muhammadu Buhari be endorsed for 2019?

You know I’m no longer in active politics. So, I can’t discuss that matter.