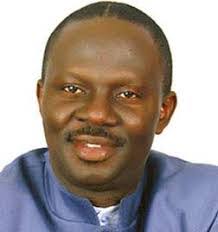 Spokesman of former military president, General Ibrahim Babangida, Prince Kassim Afegbua, declared wanted by the Inspector General of Police, Ibrahim Idris, over the statement he issued on behalf of his principal on Sunday, said the police have apologised for declaring him wanted.

Afegbua, who reported at the Force Headquarters, in Abuja, about 10:10am, yesterday, also disclosed that Babangida was fully in support of the statement and stood solidly behind him.
He turned up at the Louis Edet House in Abuja, accompanied by his legal team, led by his lead counsel, Dr. Kayode Ajulo.

He told newsmen, shortly before entering the Louis Edet House that; “the former president is fully behind me and he has been in touch with me. There’s no need for him to say anything more than he has already said.”

Afegbua said General Babangida was surprised and wondered why the police declared him wanted when he is not a criminal and added that it was the former president who called to inform him that he has wanted by the police.
He said: “It will even interest you to know that when I was declared wanted on national television, my boss, IBB was the one who called me and asked, ‘why are they declaring you wanted? Are you a criminal?’ and we laughed over it.”

After the meeting with police authorities, Afegbua, in an interview with journalists, said: “Incidentally, it became a very fair discussion. The police said there was a mixed up somewhere, to have warranted me being declared wanted and they apologised.

On the N1 billion suit he instituted against the police and some media houses, he said: “Of course, you know we have a case in court, my lawyers will advise what steps we are going to take.”

Police authorities were not available to comment on the apologies Afegbua said they had offered to him
Meanwhile, Nigeria’s secret police, the Department of State Security Services (DSS), has invited Afegbua for a chat with its Director-General, Mr Lawal Musa Daura, today.

The DSS invitation came few hours after Afegbua voluntarily honoured Police invitation at Force Headquarters and was subsequently cleared of any wrong doing by the police authority yesterday morning.

Afegbua’s lead counsel, Dr Kayode Ajulo, said his client received a call from the DSS yesterday evening indicating that he should come for a chat with the DG between the hours of 11:00am or 12:00noon.

He added that Afegbua would be going to the expansive headquarters of the secret police this morning, but could not confirm the motive of the invitation as at the time of filing this report.

“My client has right to legal entitlements which every other citizens should enjoy without fear of the government or other fellow citizens. These are rights which cannot be said to have been given to man by man, but are earned by man for being a human, because they are necessary for his continuous happy existence with himself, his fellow man and for participation in a complex society. Chapter IV of the 1999 Constitution of the Federal Republic of Nigeria is very clear about this,” Ajulo said.

Afegbua’s invitation by the DSS, some rights activists said, followed criticism of the agency that it often acted in a knee-jerk manner to arrest opposition elements critical of the Buhari’s administration, while looking the other way, when the ‘president’s friends’, make incendiary statements.