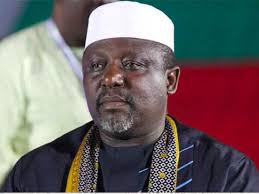 Some leaders of the ruling All Progressives Congress APC on Thursday converged in Abuja to proffer solutions to the existential threats facing the country, kicking against secession and declaring their support for a united and indivisible Nigeria where equal rights and justice are cardinal principles of state policy.

They spoke at a forum organized by the APC Press Corps had as its theme, “Sustaining United and Indivisible Nigeria: A myth or Reality”.

At the event which was moderated by ace broadcaster, Eugenia Abu, Sen. Nnamani also clarified that Gov. Buni is only chairing a caretaker committee and that he is not a party chairman.

“Governor Mai Mala Buni is not the chairman of APC as a party. He is the chairman of the caretaker committee. It is good to make this clarification arising from the recent Supreme Court judgment”, Nnamani stated.

On the issue of national unity, he said; “I will like to point out that respect and love are earned. You don’t tell someone to love you. Or respect me. Even our children, you don’t tell your child please love or respect me. You have to earn it.

“According to the lecture, all of us are involved in our country in making it more attractive so that people can aspire to say I belong to Nigeria. I am a Nigerian citizen. I am not too sure that the issue of citizenship whether it is dual or triplicate or any number of countries you can try to belong to does not tell how much you love or hate your country.

I think our country, Nigeria deserves individual responsibility to make it attractive enough for people to aspire to call themselves Nigerians. It takes a lesson and that is why history is very nice. It teaches us from the past lessons that can help to shape the future. What you can call civics is what is going on now in Japan.

Some things can be done more efficiently and that also implies restructuring. Restructuring does mean dividing our country. Because the more united we are the better we are as a country. So any reasonable person who witnessed the Biafran war with Nigeria will never preach anything near war. You won’t wish your enemy to go through that. So for those who were not born then, who takes delight in pronouncing war, it is not African Magic, that you stay back and watch. It is a thing you may not come back from. And those shouting war, under three weeks of the battle they are gone. So nobody will wish our country another war”.

“And people who are agitating for a separate nation, I think that if Nigeria is made more efficient nobody in his right senses will be saying it should be divided. Every state in Nigeria has something unique that few countries are as pleased as Nigeria. It is for us to discover our own strength and emphasize it and make it better.

Let us not be afraid of restructuring. It simply means how can we make our country more efficient and better”.

No to civil war

Ganduje who was a keynote speaker at the second quarterly lecture of the All Progressives Congress APC Press Corps which held Thursday in Abuja noted that the 1999 Constitution does not support secession.

While he instead advocated the need for restructuring, Dr Ganduje said dividing Nigeria will only create weak republics.

According to him, it is part of democracy that people should air their views, but not translate grievances into violence and bloodshed.

Ganduje said while the unity of Nigeria should be discussed, secessionist agitators must be strongly cautioned to channel their grievances to the appropriate quarters without perpetrating acts that could be interpreted as an attempt to enthrone instability and dismember the country.

“Those in the streets of South West or South Eastern states, carrying dangerous weapons, attacking security personnel and formations as well as innocent citizens, whose only political education comes from misguided and narrow role models, should be cautious not to become cannon fodders for mischief-making. Nigeria is bigger than all of us and there is no challenge that is bigger than the political class to solve.

“The leadership of the groups in the two geo-political regions spearheading the bid for secession from Nigeria, have gone too far. They incite followers to acts of violence against Nigerian security forces and has established a paramilitary wing. No serious government will stand by and watch this scenario and go to bed. While the matter is before a competent court of law, I think these people should understand how far they can go.

It is on record that the great Dr. Nnamdi Azikiwe, the first president of Nigeria, was an Igbo man and also a perfect negotiator and foremost champion of Nigeria’s unity. The same for the great Chief Obafemi Awolowo. He never agitated for secession. He was loud and clear on restructuring of the federation. And that demand is even louder and the debate is on and no one is troubling agitators for agitating for restructuring of the federation. What is more, the governing party, the APC has a working document already on this (restructuring). This is the way we should all go. There should be no secession distraction at this time.

“Therefore, at this point in the country’s history, all right thinking citizens, irrespective of their tribal and religious inclinations should bond together to sustain the corporate existence of the most populous and naturally endowed nation in Africa. We must shun temptations and anger capable of leading us into more turbulent time that cannot be controlled as we have in some North African and Middle Eastern countries.

Let me repeat here that Nigeria is a united and indivisible country. Our constitution has taken care of that. I don’t see secession as the way out of the current challenges afflicting the nation. Instead, advocates of secession should have a change of heart and I recommend dialogue as a crucial option for addressing their problems.

“We are too fused, in fact too entropic together to be divided at this time. Let’s repair our broken walls instead and move on! Let’s debate restructuring, not secession or self-determination. It is too late in the day. Let the labour of our heroes past not be in vain! Let’s hail, not hate Nigeria at this time”, Ganduje added.

Also speaking Okorocha noted that Nigeria was going through a difficult time and advised leaders to prioritize the issue of justice.

He said; “Our almagmation without the people coming together to discuss and how they can respect each other have been a major issue and secondly, we were not able to create a myth. So we need more of a myth than what we call reality.

“We need to create a myth that can make us feel together as one indivisible people. but not that this myth is not created and political parties tend to divide us.

“What we must do as a people is to address the issue of injustice as a nation, starting from the stomach injustice which we call hunger. For instance, I don’t have any enemy from the North or South West. The biggest political problem I have recently is from the South East, from my State.

“Number two, every leader that emerges in this country must treat Nigeria as a family, must never show segregation of any kind. If you know an Igboman, an Igboman is not asking for anything, he is asking for a level playing ground. Do you know if today people are doing what Ganduje did in Kano, giving Igbo people appointments, if every other Governor does that, shows a sign of love beyond area of tribe and religion, he will be uniting this country?”

Okechukwu on his part dispelled insinuations that Nigeria, as opposed to other countries, is an artificial creation, stating that as a student of history, there is no country in the world that does not have elements of artificial creation.

“So Nigeria for me will remain indivisible and indissoluble. Under the Abacha constitutional conference in the ’90s, my people in the East came up with proposal for geopolitical zones. It was accepted but not in the constitution and since then the issue of regions failed under successive Administrations.

“Why did it fail? It did because many states did not see why they should give up their states and collapse into a region. We did not want to go back to Egypt.

“If you did not achieve a simple thing of having regions, is it breaking out that will solve it. I tell my brothers in IPOB that I do not blame them, that it is their environment that shapes them. If you go round the country and see how the Igbos are thriving, breaking away will not be in our interest and it does not have the support of the generality of the people”, he stated.

Mallam Baba Bala Mohammed who represented Dame Tallen said Nigeria will remain indivisible and united, but that women have a great role to play not just in government but even in the party machinery.

“Let us ensure that not only 35 percent affirmative action is roughly to fruition, but that we should give opportunities to our youths to participate effectively in politics and governance.l”, the minister stated.

Minister of State in the FCT who was represented by Engr. Adaji Usman said leaders must begin to lead with the fear of God.

“With regards to the issue being discussed today, the problem with us as a country is first and foremost, the problem of leadership. We have leadership being given to us by those who were elected into offices of responsibility, but do not return back to the followers as those who have brought them on board,” she stated.

Senator Jibrin on his part also expressed belief in he indissolubility of the country.

“Let me quickly say that I believe in the sustainability of the unity and indivisibility of this country, is in reality. I believe that this country’s, okay and what we need to do at all times is to engage in dialogue. People who want things to be done should go through the constitutional means”.

Earlier, Chairman of the APC Press Corps, Mr Jide Orintunsin said the public lecture series was aimed at providing workable template options for effective good governance and serve as a medium for the deepening of democratic norms and institutions by engaging key players in politics, public administration, academia and economy.