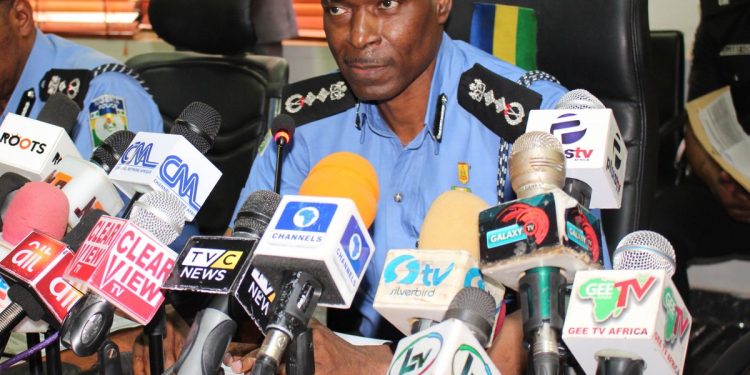 The acting Inspector-General of Police (IGP), Mohammed Adamu, has formally assumed office with a promise to restore the dwindling primacy of the Nigerian Police Force within the internal security architecture of the nation.

Adamu has also promised to provide professional and responsible leadership to advance the fortunes of the police.

He called on police personnel to abstain from conducts capable of dragging the image of the police into disrepute as well as putting their career in jeopardy.

The new police boss gave the charge when he took over from Ibrahim Idris.

Earlier, the IGP pledged that the police, under his leadership, would play an active role with the armed forces in restoring civil authority in the North East.

The IGP, while noting that the upcoming general election would subject the professionalism and commitment of the police to national and international scrutiny, said the next few days would witness massive deployment of police personnel and other activities aimed at ensuring quality election security by the police being the lead security agency in election management.

Adamu, who said he was not unmindful of possible security threats that some misguided political actors and their followers might want to create during the elections, advised them to have a rethink or have themselves to blame as the nations has had enough of electoral violence.

According to him, “We have, within the short term, two major national assignments, where our professionalism and commitment to duty will once again be subjected to national and international scrutiny.

“First is the conduct of the presidential and National Assembly elections on February 16, and the governorship and state assembly and federal capital territory area council elections on March 2.

“These national engagements are of immediate priority to my leadership, hence, in the next few days, the nation shall witness concerted police deployments and other activities, which will all be directed at ensuring quality election security service delivery by the police being the lead agency in election security management.

“While with your support I am confident that we have the operational capacity to ensure the success of both exercises, I am not unaware of the possible security threats that some misguided political actors and their followers may attempt to pose during the general election.

“To such elements, I must sound a note of warning that, as a nation, we have had enough of electoral violence, hence the Nigerian Police, under my watch, shall work with the Independent National Electoral Commission (INEC) and sister security agencies in guaranteeing a peaceful and secure space for all political parties and the citizens to freely exercise their electoral rights. We shall not hesitate to identify, isolate and bring to deserved justice any person or group that attempts to threaten our sacred democratic order.

“To the unrepentant felons that may want to put our common will to test, the message is being relayed here, loud and clear, that in securing law-abiding citizens during the elections, we shall not hesitate to deploy our potent assets to deal firmly and decisively with electoral deviants.

“Consequently, I call on political actors to assist the police and other law enforcement agencies in sustaining the gains recorded in our democratic journey. They should always remember that politics is a game guided by rules and it behooves them to play the game within the dictates of such rules. On our part, we assure the nation of our determination to play our roles fairly but firmly towards guaranteeing a peaceful electoral process and a credible outcome.”

On his agenda for the police, he said: “My appointment represents a call to duty and a charge to restore the dwindling primacy of the Nigeria Police Force within the internal security architecture of our beloved country. Ladies and gentlemen, commanding the largest police force in Africa, particularly at this crucial time that the country is faced with multi-faceted security challenges and at the peak of preparations for the general election, is undoubtedly an arduous task.”

The IGP, while noting that the absence of transparent, knowledgeable, accountable and motivational leadership was a major obstacle in the police, said: “All that you desire, from my experience, is a transparent, responsive, motivational, accountable, and knowledgeable leader, who will not only treat you with the dignity you deserve in your line of duty, but who is also sensitive to your welfare needs and fair in the manner your promotion and other reward regimes are addressed.

“The absence of this level of leadership has always been the missing link in policing in Nigeria.

“It is my firm conviction, therefore, that, if the quality personnel potential of the force are blended with purposeful and motivational leadership at strategic levels within the organisational hierarchy of the force, the lost glory of the Nigeria Police Force, which remains a concern to governments at all levels, citizens, human rights groups, the international community and indeed well-meaning officers and men of the force, shall be restored.

“With my appointment and assumption of duty, I am determined to draw on my national and international policing leadership experience to bridge this missing link.

“I assure you on this day that I will provide the highest possible level of professional and responsible leadership for you, while trusting that you shall march hand-in-hand with me as dependable professional colleagues, to advance the fortunes of the force.

“I demand that you, henceforth, resolve to abstain from conducts that will drag the police into disrepute and put your career in jeopardy, and join me in the common cause of changing the narratives of policing in the country for good. In giving effect to this, in the coming days, I shall unfold before you and the nation the strategic focus of my leadership.”

The IGP, while commending his predecessor for his contributions to the growth of the police in the last three years, solicited support from personnel to move the service to greater heights.

“Finally, on behalf of the Nigeria Police Force, I immensely thank our out-going IGP, Ibrahim ldris, for his professional service to our fatherland and wish him very fulfilling future engagement.

“I can assure him that much as he is leaving the police institution, we shall not allow him leave the police family as we shall continue to disturb his retirement in order to draw from his rich fountain of professional knowledge.

“To you, my officers and men, I call on you to continue to support me with prayers and informed pieces of advice, so that this journey we are commencing together today shall lead us to the desired destination,” he said.