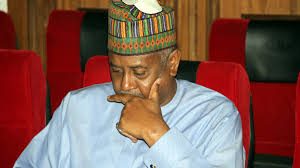 Dasuki had been on trial for alleged diversion of funds meant for procurement of arms to combat the Boko Haram menace to the 2015 President campaign of then ruling Peoples Democratic Party (PDP).

The bail granted the embattled former presidential aide, on Monday, would be the sixth such bail granted him since trial.

The trial judge, Justice Ojukwu, described the continuous detention of the Dasuki for the last two and half years as ‘an aberration to the rule of law and the contrition’.

She, therefore, grated the former NSA bail in the sum of N200 million and two sureties.

The sureties according to her, must not be lower than grade 16 in the civil service and where they are private citizens they must be owners of landed properties in Asokoro, Maitama, Utako or Garki area of Abuja.