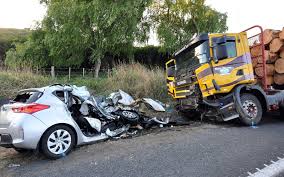 An accident that involved a truck belonging to Zeberced limited, on Friday, claimed multiple lives including a solider and 19 vehicles along Abuja-Keffi expressway in Abuja.
Preliminary investigation confirmed that the accident which happened at about 10:30 am was as a result of break failure on the side of the truck.
Eyewitness told Saturday Sun that the driver was descending the Kugbo hill when he realized that his break system have failed.
“It was obvious that he couldn’t control the vehicle anymore and instead of heading to nearby ditch to stop the truck, he took the wrong decision of using people and vehicles as break. It was catastrophic because innocent lives were lost and vehicles destroyed,” he explained.
Nyanya Unit Commander of the Federal Road Safety Corp (FRSC), Micheal Arinzeagu, who led the rescue operation narrated what happened.
He said: “There was minor crash earlier between two motorists who were unable to settle themselves peacefully. They parked and were claiming right. In the course of the argument, a soldier on a motorcycle stopped and tried to make peace among them.  Before then, the traffic had built up.
While the soldier was trying to make peace, the zeberced truck that had already failed break, apparently loaded with chippings, was descending the Kugbo hill.
“As the driver could not control the vehicle again, he begun to crush vehicles along the way. Unfortunately, the soldier that was trying to make and many others were crushed by the truck.”
When asked on the number of people that died, the FRSC official said, “We could not give exact number of people that died because we were busy trying to rescue those that were still alive.
“We are yet to visit the hospitals where they were taken to. But we counted 19 vehicles including the Abuja high capacity bus (elrufai bus) and several other expensive vehicles that was damaged,” he explained.
He appreciated the combined effort of the Police, Civil Defence, VIO and others that led to quick response to the occasion.
source:the sun