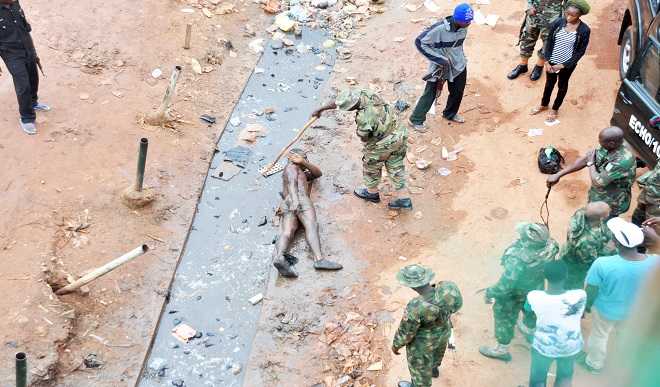 A woman has claimed that her husband, Prince Adeola George Oyekan, died as a result of being brutally beaten by four Nigerian soldiers. Glory Fagbayibi told our correspondent that the four soldiers gave a severe beating to her husband at the instance of the landlady of 10 Prince Jamiu Oyebade Street, near Car Wash bus stop in Ogijo, Ogun State. She added that her husband, who owed the landlady a month’s rent, died 15 days after the assault.

Mrs. Fagbayibi stated that she and her husband were in the same room when four soldiers, led by the landlady’s son, whom she only identified as Tunji, barged into their apartment and descended on her husband. She added that, after assaulting her husband, the soldiers bundled him into a van and drove him to 174 Battalion barracks at Ogijo where he was further brutalized.

According to the widow and other sources in the area, the landlady’s son, Tunji, invited his soldier friend, Godswill George, from Ikeja cantonment. The sources alleged that Godswill George then mobilized other soldiers from 174 Battalion to join him in the assault that led to the death of Mr. Oyekan.

Our correspondent learned that, upon his release by the soldiers, the victim filed a complaint at the Ogijo Divisional Headquarters of the Nigerian police. “We went to Ogijo police station to lodge a complaint,” said Mrs. Fagbayibi. She added: “The police took pictures of my husband and asked if we would like the issue to get to court. The police ordered the landlady and his son to pay for the medical treatment of my husband, but up till the death of my husband, they did not pay anything.”

She continued: “Both the landlady and her son fled for some days, but the police were able to apprehend them and keep them in detention.”

An aunt of the deceased told SaharaReporters that the hospital where George was admitted for treatment stated that the cause of death was internal bleeding caused by the severe beating from the soldiers.

A referral note seen by our correspondent stated that the deceased was referred from Pillar Hospital, where he was initially seen, to Ikorodu General Hospital for some dental procedure. Mr. Oyekan’s stated that five broken teeth were removed from her late husband’s mouth.

“A few days after the beating, and with continuous pain in my husband’s mouth, we took him to the hospital for a checkup. Not less than five of his teeth were removed. Pillar Hospital then referred us to Ikorodu General Hospital for further treatment when they could no longer handle his condition,” the widow said.

One of Mr. Oyekan’s cousins said she went with the wife of the deceased to the army barracks to plead with the soldiers beating Mr. Oyekan. She said they found her late cousin hung to a tree as two soldiers repeatedly flogged him. She added that, while she and the victim’s wife were still begging, the soldiers ordered Mr. Oyekan to cut an area of grass in the barracks as the soldiers continued to beat him.

“I went with my cousin’s wife to 174 Battalion. When we got there, we were shocked to see how my cousin had been disfigured due to the beating he had received. I saw my late cousin hung on a tree, being beaten by two soldiers. While we were still there pleading for him to be released, one of the soldiers gave him cutlass to cut some of the grass in the barracks,” said the aggrieved cousin.

Newsmen learned that Mr. Oyekan, a prince in the Oyekan royal family, worked at the Apapa wharf. A family source said the late Oyekan was forty years old, but the hospital referral listed his age as thirty-seven.

Nigeria Cannot Defeat the Igbo and Yoruba At The Same Time