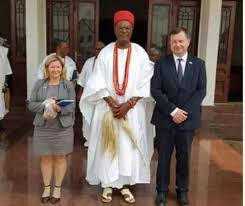 OPEN LETTER TO MAZI NNAMDI KANU ON THAT UNFORTUNATE MESSAGE TO AGBOGIDI.

Our attention has just been drawn to a most unfortunate, irrational and distasteful tweet put out by you on the 21st of March, were you sought to disparage and outrightly disrespect the office and person of the Obi of Onitsha, Igwe Nnaemeka Achebe.

Ordinarily, we would ignore your outburst but due to fact that you have managed to build up a following, it is important that we attempt to clarify issues for the benefit of the many ignorant and gullible persons who are even now reacting to your baseless rants and joining you to insult the revered monarch.

Let’s be clear on something, in that unfortunate tweet, you said “Igwe Achebe, the Obi of Onitsha, MUST not allow his office to be used by #Fulani Janjaweed terrorists in Aso Rock to ferment trouble for #ESN around Onitsha and environs, otherwise it will end in tears for him & his local Miyetti Allah funded vigilante named Onitsha Ado” and by so doing, issued A DIRECT THREAT to Agbogidi and also the Onitsha Vigilante Service and it is now necessary to interrogate the crux of the matter.

1. Are you aware that the Onitsha Vigilante Service has been in existence for the past 19 years? This is way before you ever thought to kickstart the ESN?

2. Can you claim not to be aware that most communities in Igboland have vigilante security settings protecting the lives and properties of their members?

3. Why come on Twitter and lie so brazenly, claiming that a Vigilante Service that pre-existed ESN was set up to ferment trouble for the ESN in Onitsha and it’s environs”?

4. How does equipping an already existing local vigilante service equate to fermenting trouble?

5. Is it not the height of dishonest irrationality to import a convenient lie by claiming that the already existing Onitsha Ado Vigilante Service has the backing of Miyetti Allah?

6. Since when has it become a crime for a monarch to put things in place to safeguard the lives and properties of those living within his domain?

7. Let’s even assume that the Onitsha Ado vigilante service was set up by Agbogidi today, who on Earth gave you the right to question his authority in taking steps to safeguard the lives and properties of people living within his domain?

8. Are we to take it that you are averse to a people taking steps to protect themselves against criminals but would rather embrace a situation where they have a field day at the expense of those living in Onitsha and it’s environs?

9. Does it mean that communities no longer have a right to take urgent steps in protecting themselves in the face of the obvious failure of security agencies in doing the needful?

10. What on earth do you stand to gain if the Onitsha Vigilante Service that has done so much in ensuring peace and order within the metropolis is disbanded?

11. Why have you singled out the Onitsha Vigilante Service for public opprobrium when it is a known fact that every Community within Igboland has their own vigilante service?

12. Is it impossible to imagine that your current baseless rant against the Obi of Onitsha stems from an envy and irrational unwillingness to entertain the prospect of sharing same stage with another voice within the realm, which recently played out when adulations heaped on Agbogidi went viral as a result of him confronting the IGP in defence of Ndigbo?

We can go on and on with our posers but one thing is certain, you are not dumb not to know the sickening effects of your current propaganda antics against the person and people of Onitsha Ado!

You know as well as we all do that you command a following and have managed to instil in them a certain mindset that embraces every word you say wether they are right, wrong, just or unjust!

And so you now deploy this massive platform in a misinformation drive that is not only sickening but actually says a lot about your mindset and motivations for how on Earth can you not see the action of protecting the lives and properties of people as a move worthy of commendation?

As a self styled freedom fighter who ought to know and appreciate the dehumanizing and painful effects of being denied ones rights, it goes against rationality that you are now the one championing the denial of another’s rights in taking steps to protect his people and if you can only come down from that high horse where you apparently now see yourself as an infallible god, whose words must be obeyed, it is important that we tell you the truth of your obvious gaffe irrespective of whose ox is gored or the insults your horde of unthinking supporters are bound to unleash!

You know as well as we do that what you just did is an attempt at basically taking out every voice of authority in Igboland with a view to guaranteeing your place as the only voice in the realm and this would explain your current misguided and intentional outburst against the revered monarch whose only crime is taking FURTHER steps to secure his domain against rampaging evil and unreasonable men.

We must point out that throughout history, you will not be the first human being to not only command a following willing to sacrifice their Ako-Na-Uche (God given brains) on the altar of every word you utter and one would have expected that you’ll see the opportunity presented by your massive platform as one that must be pursued with all sense of humility, decency, discipline and honesty but it would appear that you are gradually falling into the same trap others have fallen into when they erroneously equated the adulations and praises of men to infallibility.

You now sit on your exalted throne, issuing threats and blowing a dog whistle to your mob of unthinking disciples who will now take the “gospel” of debasing and insulting Agbogidi to a whole new level and is it any wonder that your radio Biafra has upped the ante in spinning every lie they can possibly conjure against Agbogidi and the Onitsha Ado vigilante service?

We have taken pains to address you directly because we know you are smart and intentional in your every utterance and we are not under any illusions that your mob would understand this message but we will keep speaking up against this cancer you are gradually spreading across Igbo land.

A cancer where contrary opinions are viewed as anathema and outright threats issued to those who dare confront, appear to confront or interrogate your utterances but we will say it as it is even when it is obvious that you are dancing naked in the market square to the constant adulations of a mob who praise and adore your non existent resplendent robes!

At the rate you are going in seeking to crush by hook or crook, every voice within the realm, it is becoming increasingly obvious that you are advertently or inadvertently becoming that which you rile against because a freedom fighter that actively does everything to deny another his rights to take actions that would protect his people, is no different from the Janjaweed and Fulani he daily calls out.

We must warn that you desist from further denigrating Agbogidi for we are at a loss understanding why you’re intent on destroying his laudable attempts at safeguarding his domain and we’ll have you know that it is not a worthy Igbo trait to be seen insulting your elders, let alone someone as high and revered as the Obi of Onitsha who is old enough to be your grandfather.

If you were not properly trained and schooled on how to address elders, please be aware that true sons and daughters of Anambra will never be part of your current gutter antics which really does not tell well of your breeding and we will not allow you engender a situation of crisis in our dear state which has sofar been fairly peaceful.

We know you currently brim with supreme arrogance and an incredible Messiah complex but like that child who pointedly and rightly raised the issue of the king’s nakedness whilst others applauded his non existent resplendent robes, you need to be told that if you have any modicum of honesty, you should by now use same Twitter platform to tender an unreserved apology to the Obi of Onitsha and his people for that baseless and unwarranted attack.

It is hoped that your arrogance has not reached the stage of men like Hitler or Jim Jones who rather than tell their followers the truth, deployed every despicable means to ensure their stranglehold on their minds.

Ofcourse we all saw how the Guyana Tragedy played out, where a man played god and led his members to their certain death and we are putting the world on notice that should a strand of hair fall off any member of the gallant Onitsha vigilante members or they suddenly are attacked or something untoward happens to them, the world already knows who to hold responsible.

We have equally noted the threats to the life of the revered monarch and have taken both local and International steps to put every necessary authority on notice should you or your agents decide to be unfortunate by acting on your threats.

Let it be known that we are not averse to your agitations but only ask that you extend same courtesy you demand from others because no matter how passionate you feel about your seemingly deified status, you are not God, you do not enjoy a monopoly of wisdom and you certainly have no rights under the sun to imagine you have a right to tell a king how to run his domain.

Like we said earlier, this message is not for your unthinking and predictable mob who we are sure have lost the ability to interrogate facts but must be told by you on how best to think and react which in most cases, end up in insults and threats, but be rest assured that the world has been put on notice of your threats whilst hoping that somewhere in your grey matter, you still retain the ability for deploying commonsense.