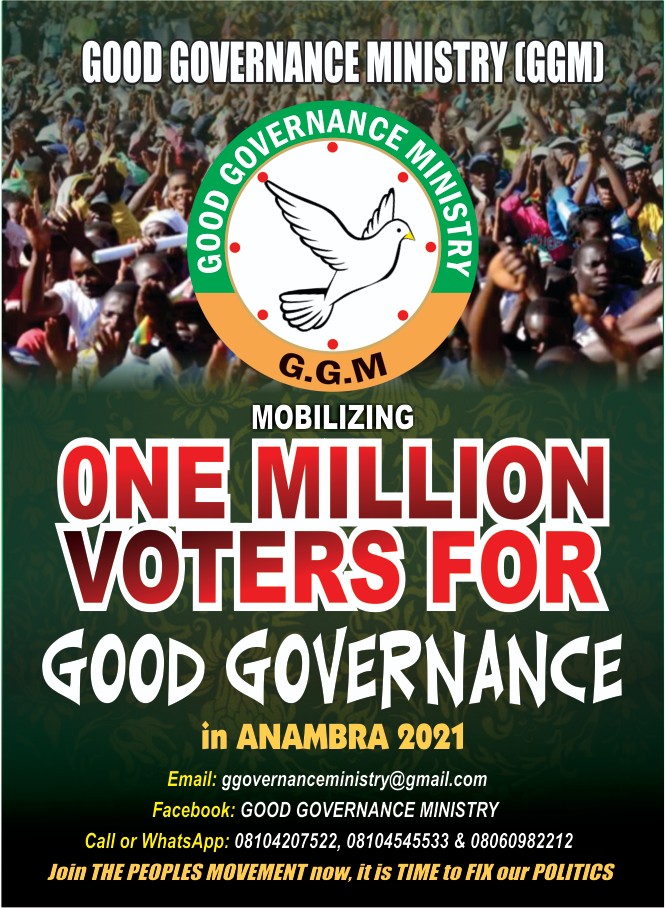 Ahead of Nov 6 Anambra State  Gubernatorial election ,the Leader of Good Governance Ministry(GGM) – Comrade Chinedu Asuzu has declared that the power of people is stronger than people in power ,advising people in a weekly radio people at Odenigbo FM every Monday 11-12 noon that this year election would be determined by the masses. Chinedu Asuzu ,who has been sensitizing the ordinary people via radio station for more than one year and with millions of followers on the social media ,announced that this year election means a lot to every Igbo man.

In yesterday radio program sponsored by Good Governance Ministry , the Leader of GGM told politicians without a known ideology to retire from politics as the days of money politics have expired .He reminded his numerous fans that those in Government are employed by the people to serve peoples’ interest and that is why they are called public servants. He further stated that the people have lost confidence with government at all levels ,hence the reason why they complied to the instruction of non -state actors to sit at home.

”Our people have suffered so much in the hands of internal and external enemies that they need political leaders who can show them real love in truth and honesty .Our people have failed to play issue- based politics. Political Positions are determined by moneybags and stakeholders of questionable characters,thereby making a mess of our rich cultural heritage .It is not about confronting the external enemies alone,it is also instituting the right culture that would encourage hardworking and discourage ‘ego mbute’ . People prefer the easy way out,cutting corners and unfortunately our society celebrates men with questionable characters.

Our education system is in a mess! Our academic curriculum is designed to produce certificate tigers .There is a need for total overhaul ! We need to build a competitive system that will allow a visionary leader to emerge and perform .Yes, the 1999 constitution as amended is against the collective wishes of our people but a State Governor has a lot of constitutional power to effect people driven reform and programs. As the Leader of Good Governance Ministry ,we have since started mobilizing one million voters and we request for collaboration with good men and women of good conscious who desire positive change in our land to join hands with GGM in promoting ideological politics ” Asuzu concluded

Good Governance Ministry holds weekly political meeting every Saturday by 2pm in Awka .The Ministry is also assisting people via online voters registration exercise.Chinedu Asuzu gave out his phone number – 08104545533 for people that wish to know more about the work of the ministry and for reporting bad governance around the communities.

The radio program ended by 11.59am