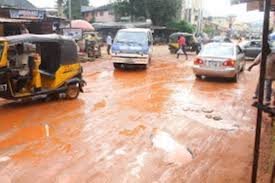 Are we cursed or are we the cause? This rhetorical question was raised years ago by Mr Peter Obi,former Governor of Anambra State.  Yet ,Mr Obi was the State Governor for eight years constructing low quality roads in every part of the State. No wonder, many roads in awka ,nnewi and Onitsha have become dilapidated begging for urgent attention.

It is unfortunate that Public Officers are not held accountable over the  quality of works done while in the offices. Billions of naira were spent on these roads that have not lasted for 4 years  and billions are budgeted every years for the maintenance. Few days ago ,BVI Channel 1 Reporter was on routine inspection of the environment and what was captured in awka alone is better imagined . Street roads were almost collapsing even as rainfall is still knocking . Sadly, these are roads previously constructed with very low materials at a very high cost. We are not reporting about roads not constructed before as they are many. This is in a place where millions of Graduates are jobless including engineers .It is unfortunate that many Government officials are serving their personal interest at the expenses of better society.