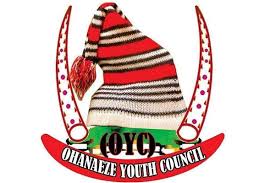 In my 12 years participation in Ohanaeze Youth Council(OYC) before I became the president, I saw an organization that belong to Ndigbo but it doesn’t serve the Interest of Ndigbo. I took a decisions that I must be the president to change the Narrative.

I discovered that the organization was existing on radio and pages of news papers including in the pocket of few youths who held it as their personal affair.

I was among those who complained about the activities of Ohanaeze Ndigbo and Igbo political office holders at large. But at a time I developed a thick-Skin and a philosophy of life that the best way to stop a reckless driver who refused to take correction and drive carefully to save the lives of the passengers is to go and learn how to drive and kick the reckless driver out of the Steering. As i developed a thick-skin, i passionately joined Ohanaeze Youth Council(OYC) with target to reform it and also reform Ohanaeze Ndigbo that was in control of few unpatriotic rulers and political profiteers.

This is exactly what i did at last National Convention of Ohanaeze Youth Council OYC held at Enugu and i emerged as the 4th National president of the Council.
I want to inform you today that any patriotic progressive Igbo youth reading this now are among the leaders we look up to that will impact on the new Igbo generation.

Ohanaeze Youth Council(OYC) is the Apex sociocultural organization of all Igbo youths, to promote sociocultural, political cum economic development in Igbo land. At the Inception of Ohanaeze in 1976 when it was Igbo Union until 1979 it was renamed Ohanaeze Ndigbo. Until 1997 there was no Youth body of Ohanaeze Ndigbo, but at the peak of the tenure of Justice Eze Ozobu of blessed Memory in 1998 Some pro- Igbo student’s Activist then approached Ohanaeze Ndigbo led by Justice Eze Ozobu to establish the Youth body of Ohanaeze Ndigbo. Immediately Justice Eze Ozobu who solely believe in successional leadership approved the Establishment of “OHANAEZE YOUTH COUNCIL (OYC) and Comrade Nnandi Nwokeocha became the National president, who held the position for three consecutive times, followed by Comrade Frank Orji from Abia who came in at the 2010 National Convention. In 2014 another National Convention was held and Comrade Chukwudi Anachuna from Anambra became the National President. Another National Convention was held in 2019 when Comrade Igboayaka O Igboayaka from Imo emerged the National president.

Nwanne a new history was made as i elected the National president Ohanaeze Youth Council OYC on 11th May 2019 and i have set plans to achieve my vision. At inception of my emergence I initiated the following National Executive Directorates in Ohanaeze Youth Council(OYC) which was approved by the (NEC) of the Council.

It’s my vision to make the Council a membership organization, first in history i initiated the need for the council to have membership card. I also started constituting state executives and branch executives with conventions/congresses unlike before what exist is only National Executives.

Today i have conducted convention in Delta, Enugu, Ebonyi, and congress in Imo, Anambra, Rivers and Abia. Consequently, my plan is to establish the leadership of the Council in all LGA’s and Communities of Igbo extraction. This is the only way Igbo youths can speak in One Voice, and take over our land from the hand of political profiteers.

OUR MISSION
Nwanne we must now hold our Igbo political office holders, Governors, Senators, Reps, ministers etc responsible. Hope you remember that charity begins at home?
They are mostly responsible for the colossal leadership failure we had in Igbo. Obviously, it’s not totally the Hausa/Fulani as we assumed over the years.. The Present Igbo political office holders and leadersip of Ohanaeze Ndigbo constitute 75% cause of marginalization and poor leadership we have experienced in Igbo land.

(C) Oseakwa (River Ulasi) Ihiala Anambra that linked to Osemoto Oguta River Imo State Is only18 nautical to Atlantic Ocean with 20m deep without dredging. Do you know that Ulasi is the deepest River in Nigeria, (Strategically located connecting Anambra Imo, Delta, Beyelsa and Enugu)

Why do we have Moribund Seaports in Igbo land? It’s is a deliberate orchestrated conspiracy, which the Northern political Mafians and Yorubas conspired and declare that Niger Delta Area is unsafe for Importation and exportation of goods. Do you know that 98% of agitation in Niger Delta as regards militancy is sponsored by Oil companies in collaboration with the Northern Mafians?

Now they are playing another game for States to manage their own solid minerals. This is a pure conspiracy for the Northern states that have gold to manage their gold, while the liquid mineral in Igbo land wilbe managed by FG.

(G) Bonny Is 45 nautical miles to Atlantic Ocean.
*A functional seaport is the only way to transform ala Igbo to become the economic hub of West Africa.
*The economic destiny of Ndi Igbo lies in Maritime business..
* Ndi Igbo must rise now to seek for economic survival.
* The sociopolitical cum economic survival of Ndi Igbo lies on the new generational leaders (The Youths)
There is a deliberate conspiracy to undermine economic development in Igbo land, actually we’re not landlocked. We must break this conspiracy and make Ala Igbo a prosperous land in Africa.
If we have functional seaports in Igbo land, Igbo business men can feed and cloth a senators.

5. Connecting Ala Igbo to Industrial Gas Pipeline( Ala Igbo is the Highest depositors of Gas in Nigeria) Imo, Enugu and Ebonyi

6. A missive campaign/ political consultative engagement for the Re-opening of department of Chemical Engineering at UNN that was shutdown since 1970 after the war. ( the best department in African and Among 10th best Department in the world in Early 60’s)

7. A massive Campaign/ political consultative engagement to construct the federal road that lead to Abuja, from Anambra Otuocha/ Nmiata to kogi by extension to Abuja(only 3hrs drive from the Eastern Nigeria to Abuja)

We must Kindly disregard the conspiracy of exclusive list, the only fact in the exclusive list is the printing of currency which the state can’t do, but any other item there can be executed by the state. If state government can build federal roads and seek refund from federal government, the same state government can seek dredging our potential Seaports, Ring inter-state road of Igbo extraction, build power station, converting of waste through building recycling industrial that can create job and generate electricity, creation of new micro and mini cities in Igbo States by attract new infrastructural development in rural Area like Banks, Schools, hospital, markets and small scale industries.

Over 50 years we have been hearing about Aba, Nnewi, Onitsha, Awka, Owerri, Asaba, Portharcourt, Calabar, Umuahia, Abakiliki, till today no one can point at any new City established in Igbo land by our Governors. Creating a new City in areas like Ozubulu, Owerre Nta, Umuagwo, Mbaise, Mbano, Ohaozara, Uturu, Ariam, Afikpo, Ekwuluobia, Arondizuogu, Elele, Oguta,etc will be done by an Igbo man not an Hausa/Fulani man. I hope is not a Fulani man is holding creation of such cities?

Nwanne m, not having all these things is not because of Fulani or Nigeria government. We must liberate Igbo land from shackle of bad leadership. We have Governors in Igbo land who are merely Northern servants.
Nwanne m, the masses are the most powerful people on Earth. Ndi Igbo must convert their population into a political capital. Ndigbo constitute 42.8 of total population of Nigeria, the Fulani’s are not more than 7 million people. Therefore, it is mathematically very wrong for minority to marginalize majority, our undoing is poor strategy the inability to have a long term political cum economic project.
Ndigbo must stop this blame game of hausa/fulani and embrace the challenges ahead of us.

Nwanne the problem of Ndigbo are our leaders in Igboland, the youth must rise now and organize themselves to access political power. No Igbo reasonable youth now should expect Development of Ala from the current politicians, they have failed, and if you give them another opportunity, they will fail again. The solution lies in change over.
Join OYC now for this changer over.
Join Ohanaeze Youth Council(OYC) to emancipate Ndigbo from shackle of bad leadership and followership
Thank You!
Comr Igboayaka O. Igboayaka is your brother and the National president
Ohanaeze Youth Council(OYC)