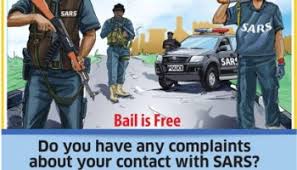 Following our massive nationwide demonstration/protest across the country on 11 December 2017, the #EndSARS #ReformPoliceNG campaign has been vigorously pursuing the cause of bringing respite to every Nigerian who has suffered at the hands of the behemoths of the rogue Unit of the Nigeria Police -SARS, by ensuring that we tenaciously pursue the scrap of the extortion syndicate, and trigger the reform of the entire Police Institution.

It is imperative to note that during our peaceful rally on December 11, 2017, we made it known to the general public, and specifically to the authorities, that our tolerance for the SARS cum Police insouciance towards the pertinent issues raised would begin to wane after 21 days starting from December 11, 2017.
Unfortunately, the Nigeria Police, as at the moment of this publication, nine days after the expiration of our ultimatum, has yet to take any genuine step to scrap SARS neither has the higher authorities Senate and House of Representatives considered this threat critical enough. In fact, we can confirm that the brutality of these uncouth SARS operatives has grossly exacerbated, to say the least, since the #EndSARS #ReformPoliceNG campaign begun.
Between December 2017 and now, we have collated over 250 new cases of wanton extortions, abductions, torture and harassment of law-abiding Nigerians by these SARS operatives. As if that is not bad enough, the rate of unlawful detention and random killings of innocent Nigerians by these authority backed rogues has never been so worrying.
On Tuesday, January 9, 2018, the internet was again engulfed in shock and outrage over the unprovoked beating of a pregnant woman in Delta State who sadly, lost her quadruplets because of the disheartening way she was battered and manhandled by SARS operatives. Video footage from the scene shows the countless scars inflicted on the innocent woman’s body, and also the overwhelming grief of her unprecedented loss written all over her face.
Recall that barely 24 hours before this incident, a young man was reported dead in Lagos after he was tortured badly in detention by SARS operatives. 48 hours before that, the internet was sweltered in vexation as reports of the random arrest of a man in Lagos and a ridiculous demand of five hundred thousand Naira (N500,000) placed on his family as bail condition by SARS operatives became public.
These incidents, we believe, give credence to the fact that the SARS unit of the Nigeria Police has outlived its usefulness as it has now become an instrument of repression, extortion, and unjust killings. It is saddening that at a time when the entire country is facing serious security threats from miscreants and terrorists, those who are expected to provide adequate safety and security for the Nigerian people are the first to unleash terror on them. This is unconscionable and unacceptable.
To this end, therefore, we would like to state emphatically that if the Nigeria Police fails to listen to the voices of the millions of Nigerians calling for the scrapping of the SARS unit and continues to allow these rogues to extort, randomly detain, and kill innocent Nigerians, we will not be able to sit idly for long. The anger of Nigerians at these uncouth operatives is already simmering and it is only a matter of time before it is unleashed.
We, hereby, urge the Federal Government of Nigeria and the National Assembly to consider the issues we are raising concerning the Nigeria Police And their monstrous SARS unit as a matter of exigency which threatens every fundamental Right of all Nigerians. The Movement is the only thing standing the gap between the Police/SARS and the full wrath of the society in response to the impunity. This however can not be guaranteed for long should the authorities continue to display blithe nonchalance to this imbroglio.
We have already invited different international media organization to Nigeria to record some of the numerous inhumane activities of SARS operatives. We have also started to organize for a mass action on this issue. We, however, need the courage and support of all Nigerians, home and abroad, to keep on exposing the brigandage of SARS and the Police without fear.
We reiterate that the ideological Movement #EndSARs #ReformPoliceNG will continue to stand in the gap to protect the lives of Nigerians and collect data on the impunity of all kinds especially on the activities of Police and SARS.
In Conclusion, we wish to reassert that our demand is that the Nigeria Police scrap its Special Anti Robbery Squad (SARS) Unit and the authorities at the National Assembly (The Senate and House of Representatives) begin effective immediately a deep reform of the entire Police Institution starting with the constitutional amendment of the Police ACT.
SIGNED:
Segun Awosanya
Convener #EndSARS
Deji Adeyanju
FOR:  Concerned Nigerians
Ariyo Dare Atoye
FOR: Coalition In Defence Of Nigerian Democracy.
Abdul Mahmud
FOR: Public Interest Lawyers League (PILL)
Bako Abdul Usman
FOR: Campaign For Democracy
Moses Paul
FOR: Mad Connect