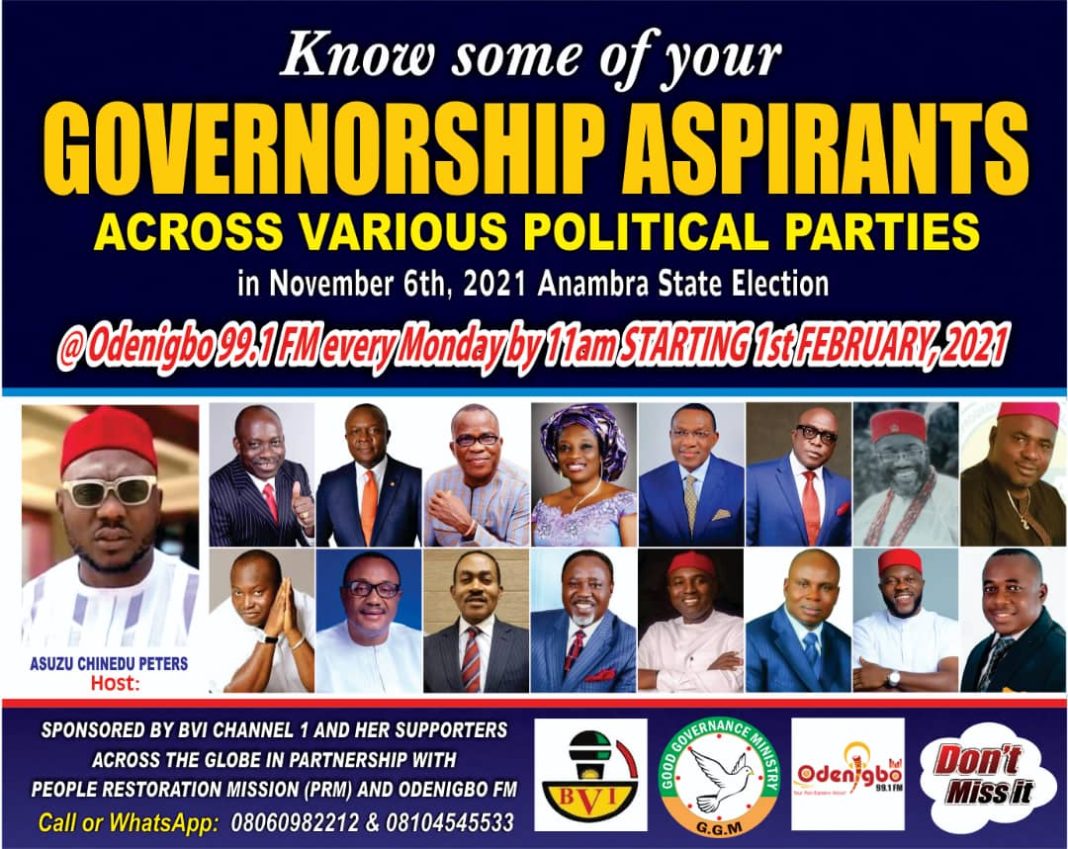 Between the 19th-29thof April 2021, I was in Anambra on the invitation of Senator Dr Patrick Ifeanyi Ubah to witness his Thank You and Declaration Tour. Dr. Ubah is contesting for the Anambra 2021 governorship election under the platform of YPP(Young People’s Party).

The entourage toured the entire 21 LGs of Anambra State in ten days. At every stop he was received by an excited and mammoth crowd. I discovered that YPP is not what outsiders think of it. The party’s spread is wide and their energy infectious. With dint of hard work and creative politics, Dr. Ubah has built a formidable network of followers and support groups down to wards in every single community in the State.

To win the November 2021 Governorship Election, all the party need do is to build on their already galvanized momentum and to remain focused with eyes on the ball. With better strategy and good organization, the election will be theirs to win.

This however is not the subject of this essay, suffice to note that YPP potentials makes Senator Ubah a major force to contend with. He has all it takes to spring a surprise and win the governorship. For Anambra 2021, I project a definitive three horse race between YPP, PDP, APGA.

APGA ordinarily would have easily called the election given its 16 years consistent leadership of the State, but the APGA effect is now jaded and damaged with serial infighting tearing down the party. The preferred candidate of the party Prof Charles Soludo has not been able to bring the warring factions together, and the bad blood between the governor and the founding members of the party who helped him to power is not helpful either. If APGA goes into the election with its deep cracks, it will be ‘Nunc Dimittis’ for the Igbo regional party experiment.

Soludo’s highest selling point is that he was a brilliant Professor of Economics and former Governor of the Central Bank. His performance as CBN Governor is now in question. Who did he help as CBN governor and how did he benefit the State with that position? In a State where religion plays critical role in politics, his faith has also come under scrutiny. Is he an atheist as some are speculating?

Another party to beat is PDP. The party parades some of Anambra’s best as aspirants. The foremost contenders with good ratings are Senator Uche Ekwunife , Mr. Val Ozigbo, Dr. Godwin Maduka , Hon. Chris Azubogu and Dr. Obiora Okonkwo.
Dr. Obiora Okonkwo, is considered by many as a seasonal politician who only surface during election seasons to use the party structure to host his ambition otherwise he has never contributed to the building of the party’s bench and never cared.
Party members do not believe in him and do not think he has the capacity to win a major election. They fear he is the type that is likely to dump and jump party after realizing his ambition.

Valentine Ozigbo is a technocrat who is reputed to be supported by the UBA Group. It’s assumed resources will not be his problem. This is about his first time of venturing into partisan politics. He has not carried any body’s bag, an essential pupilage in Anambra politics. So far his campaign has managed to make some waves but not enough spark to assure victory.

If PDP truly hunger to reclaim Anambra Government House, then they need more than a good candidate, they need a candidate that has the capacity to win and wrestle power from APGA. Party members are concerned about the collateral damage of giving ticket to a non-establishment member. They worry about giving ticket to a candidate that can only care about the husk as much as any parasite does.

I have also followed the political trajectory of Hon Chris Azubuogu . Azubuogu is a three term Honorable Member of the House of Reps. He is the Chairman of Appropriation and has used the position to immensely benefit his constituency and parts of the State. He has attracted so many projects making his admirers to christen him ‘Mr. Project’.
Azubuogu is cerebral. He appears prepared for the position he is vying except that some party members describe him as a dour and colourless politician lacking the required charm and charisma to win a major election.

Will Dr. Godwin Maduka get PDP’s ticket? If politics is a beauty contest , Maduka will win effortlessly but politics with all its intrigues is not a tea party.

Dr. Maduka is a self-assured and self-regard kind hearted philanthropist who has done so well for his people. He used his personal wealth to turn around the fortunes of his sleepy community. However, his political fortune hasn’t lived up to its initial expectations. He has not blended very well and appear disconnected with the people. They dismiss his politics as elitist and not grassroot connected.

He may end up a good governor if elected, but to be elected, he need to be on the ballot. His chances of flying the party’s flag is doubtful given that he is also not an establishment politician in the State. Giving him ticket will be pilfering the party of its talents and resources which are needed for future battles.

Will Anambra make history with Senator Uche Ekwunife? Time will tell and so much depends on how PDP primary delegates would vote. Thus far, she stands out and looks good for the ticket.

The one argument against her is that she is a woman. Anambra the say is not ready for a female governor. Whatever that means. This to me is a failed argument because what the people want is a performer and a character they can trust. Anambra is currently represented by two female senators out of three. The two female Senators are Uche Ekwunife and Stella Oduah. They didn’t become senators because they are females or by luck but by dint of hard works. The won highly contested elections defeating highly rated men of timber and calibre. Thus far, their representation in the Senate has been superlative to say the least. So, the gender argument is weak. What the electorates want is a candidate that understands their needs; who understands their need for the kind of education that will enable them fit into the economy; who understands they need jobs when they can be employed; who understands their need to be paid living wages for works they have done and that when they retire , they retire with respect and dignity by having their pensions paid.

They want someone who will create the enabling environment for businesses to thrive . They want when they are sick to be able to get affordable treatments in the hospitals. They want to live in peace and security.
Thus, they want to elect the candidate that understands the issues as it affects them and who can assist in resolving their issues. They are not bothered about sexist and gender politics.

Like or loath her, Senator Uche Ekwunife (Iyom) has had a fascinating, impressive and progressive political career. She is a veteran of several elections and reputed to be a hard fighter. She is the PDP candidate to beat in the primary election.
As an old workhorse she knows her route. If given the ticket she will be a force to contend with. She has a cult like followership who trust and believe in her. She has the resources as well as the good will to prosecute a major election. She won’t be a parasite on the party, neither would she neglect the party structure.

I don’t think there is any of the aspirants within the party who has worked as hard as she has done for the ticket, who have touched lives and invested in people as much as she has done. I don’t think any of the aspirants has the political experience she has garnered over the years and none can boast of the kind of intimidating political structure she has built and ready to roar. If PDP intends to field a candidate that is sure footed and courageous, then they need not look farther than Senator Uche Ekwunife. With her, the party is sure of now and a bright future. She has the capacity to win and make history as the first elected female Executive Governor of a State in Nigeria.