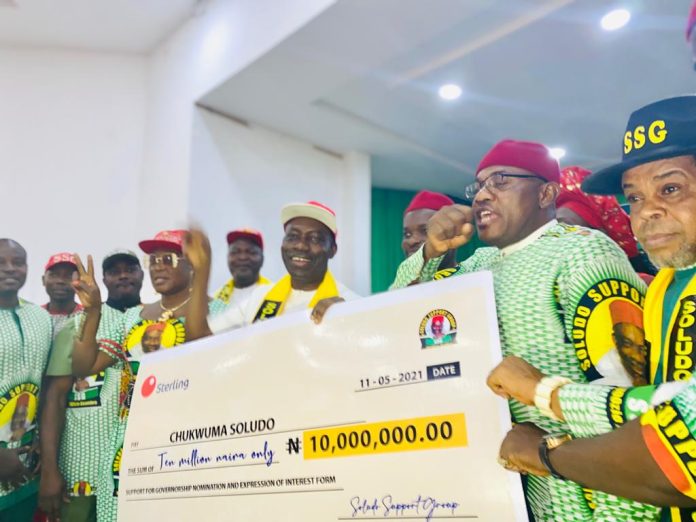 In my previous piece, I have maintained that Cee-Cee Soludo’s entrance into participation in politics has redefined political campaigns. I equally said that the Isuofia man’s ambition has revitalized and awakened the original republican nature of Ndigbo wherein a genuine cause, “community owns a project”. Perfect example could be seen in far away Imo State where Ndigbo contributed to build “Sam Mbakwe Cargo Airport, Owerri”

In demand for Soludo to succeed the incumbent governor, Chief (Dr.) Willie .M. Obiano; peasant farmers, students, women, artisans, traders, motorcyclists and every other groups are mobilizing funds to support this divine and clarion call.

The clamour for a Renowned Economist has remained consistent, today, in Awka, Soludo Support Group (SSG), one of the over 30 support groups demanding he succeeds Akpokuedike Aguleri inorder to consolidate on the exisiting APGA government’s legacy and developmental projects, and to continue leading Anambra State on global stage, has presented him with a whooping sum of Ten Million naira (#10,000,000).

The group led by its Convener/National Coordinator; Hon. Chinedu Nwoye Glamour while presenting the cheque, thanked Professor Chukwuma Soludo for accepting the consensus call of Ndi-Anambra to contest the forthcoming gubernatorial election slated for November 6.

The National Convener while thanking petty traders and peasant farmers who are majorly women, artisans and drivers for their contributions, maintained that the sum is for the Global Financial Expert to purchase the party’s nomination and and expression of interest form for the party’s primary slated to hold next month, June 23. He maintained that the group -SSG and all others will see the project through in unionism.

The ecstatic Cee-Cee Soludo who couldn’t control his emotions, immensely appreciated and thanked the group on their efforts in making their choice for consolidation and continuity.

According to Cee-Cee Soludo, “I am ready to Run and Win because my aspiration cut across all the political parties.”