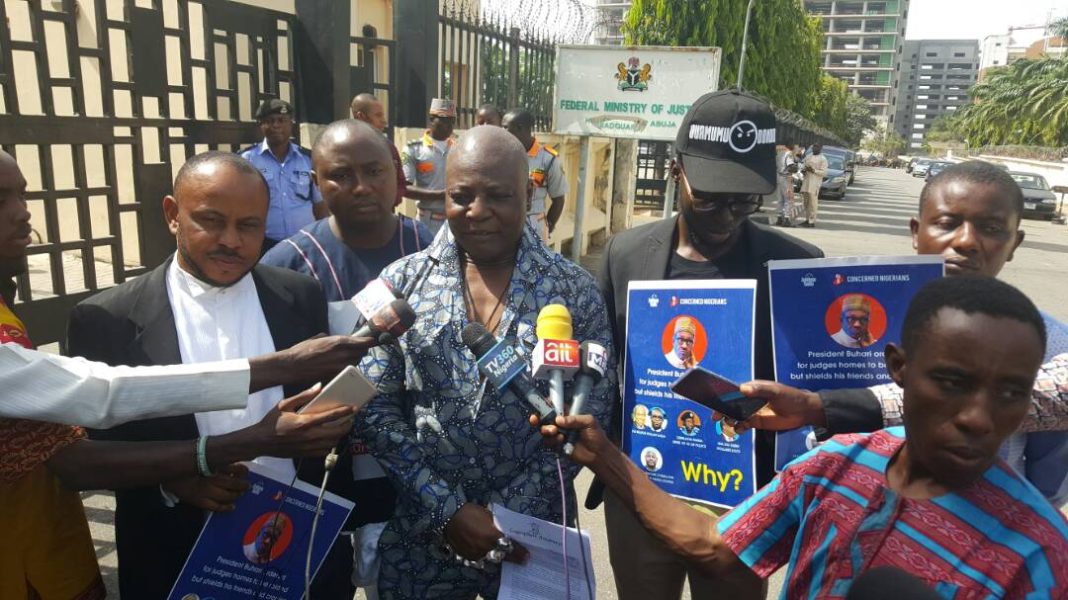 In a letter made available to BVI Channel 1 and signed by Dr Sam Amadi on behalf of the MUMUDONDO GROUP to the office of the Attorney General of the Federation,Ministry of Justice,the letter reads :

‘Request for Executive Action on Allegation of Corruption against Presidential Aides

Mr. Charles Oputa (popularly known as charley Boy) has instructed us to write this letter on his behalf and on behalf of the Our Mumu Don Do group and several of its coalition partners that are campaigning for transparent, accountable and democratic governance in Nigeria.  Our client is complaining against the President and the Federal Government for failure to publicly disclose the report of investigation into the cases against some senior officials of this government who have been accused of corrupt practices and take action to ensure their prosecution according to the law.

But, since assuming leadership of the country, the President has refused or neglected to act beyond mere words to fulfill his oath of office. Since May 29, 2015 there has been many allegations of corruption against high profile public officers and presidential aides. Some of these allegations are as follows:

N500million alleged MTN bribery against the Chief of Staff to the President, Mr. Abba Kyari

N120 billion fraud against the Inspector General of Police

The illegal reinstatement into the civil service of Mr. Abdulrasheed Maina, declared wanted by the EFFC in connection with alleged N100billion Pension Fund

In the case of the allegations against the former Secretary to Government of the Federation and the Director of the NIA, the President usurped the statutory powers of the Nigerian police and the Economic and Financial Crimes Commission (EFCC) in Section 6 of the EFCC Act and Section 4 of the Police Act and set up a presidential investigation committee to investigate the allegations notwithstanding that the Nigerian Senate, in exercise of its oversight functions under Section 88 of the Constitution, has indicted the Secretary to the Government of the Federation and the statutory responsibility to investigate crimes of such sort belongs to the Police and the EFCC. The establishment of the presidential investigation committee is therefore an unconstitutional usurpation of the powers of statutory agencies responsible for criminal investigation and prosecution.

In all these allegations the presidency has not issued public reports. The Presidential Investigation Committee that investigated the allegations against the former Secretary to the Government of the Federation and the Director General of National Intelligence Agency (NIA) has submitted its report for months. The presidency has refused to release the report. This is clearly against the provisions of the Freedom of Information (FOI) Act, particularly Sections 2 and 3 of the Act. The failure or refusal to publicly release the reports of these presidential investigations violates the President’s Oath of Office, the provisions of the FOI and declared policies of the administration. Also, failure or refusal to authorize prosecution of these clear and serious allegations of violation of law and commission of crimes amount to abuse and violation of executive power of the federation in Section 5 of the Constitution.

In the foregoing premises, our client demands that the President of the Federation Republic of Nigeria publicly releases the reports of investigation into the allegations of crimes and/or violations of law against the aforementioned public officials, namely, the GMD of the NNPC; The Chief of Staff to the President; the SGF and DG NIA; the Inspector General of Police and Mr. Abdulrasheed Maina.  Our client further demands that the President authorizes the Economic and Financial Crimes Commission (EFCC) to commence prosecution of the cases against these public officers in line with the provisions of the law and the report of these investigation reports and executive reviews.

It was gathered that Charley Boy led the group with many other Comrades to the Minister’s Office.There was unusual calmness within the premises as MUMUDONDO coalition marched to the Minister’s Office to deliver the letter.Charley Boy told the Pressmen after the submission of the letter that the era of impunity has gone forever in Nigeria with the arrival of OURMUMUDONDO .He encouraged all the angry and frustrated Nigerians to stand up to be counted and insist that the right thing be done always.