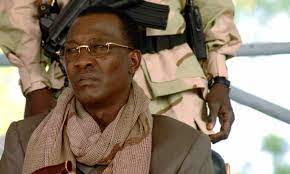 He was reported dead on Tuesday, a day after he won re-election for a sixth term in office.

The Chadian national army confirmed his death from gunshot injuries in a fight with rebels.

The president was commanding his army in the battle against rebel forces in the far north over the weekend.

There has been a prolonged battle in the African country between government forces and the rebel Front for Change and Concord in Chad (FACT).

The unrest had escalated in recent days as anti-government fighters approached N’Djamena, the capital city.

Azem Agouna, a spokesman of the Chadian army, said in a broadcast that the late leader “breathed his last defending the sovereign nation on the battlefield”.

Aged 68, Déby was one of the longest-serving presidents of Chad, having stayed in office for about 30 years.

He came to power in a rebellion in 1990 and won a sixth term on Monday in a controversial poll boycotted by the opposition.

He was known to often lead the country’s troops in battle against rebel forces and Boko Haram insurgents.

It was his penchant to lead from the frontline that drew him closer to his last breath.

He had been expected to give a victory speech to supporters, but Mahamat Bada, his campaign director, had told reporters he had instead gone to visit Chadian soldiers.

“The candidate would have liked to have been here to celebrate… but right now, he is alongside our valiant defence and security forces to fight the terrorists threatening our territory,” Reuters quoted him to have said.

the US ordered the departure of non-essential staff from its embassy in N’Djamena, the capital of Chad, due to fear of armed violence.

“Armed non-governmental groups in northern Chad have moved south and appear to be heading toward N’Djamena,” the US state department had said.

Similarly, the British government had urged its citizens to leave the country “as soon as possible.
Cable