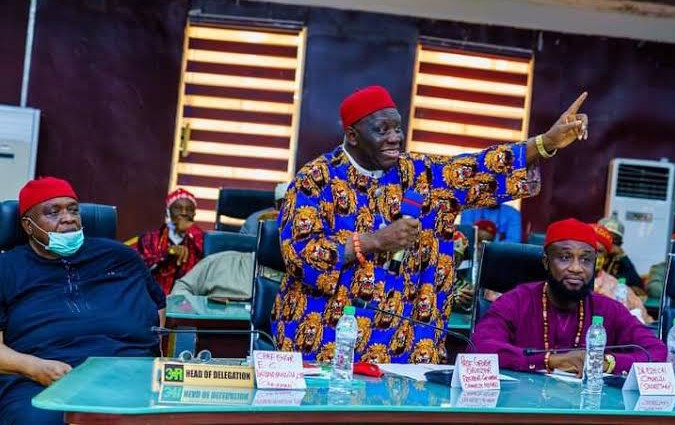 In my own opinion, the enemy of Ndigbo is Ndigbo itself. I remember a time in this country when all d 6 ministers in Jonathan’s kitchen cabinet were all Igbo’s. Ayim Pius Ayim was SGF, Ngozi Okonjo Iwealla was in charge finance, Emeka Wogu was in Labour and productivity, Berth Nnaji was in Power and Energy, Dieziani Madueke was d powerful minister for oil. The 6 of them outside d Federal Executive Council would meet and decide what and what not to be discussed at d larger FEC. Whatever they decided would eventually be d position of government. In 6 years, this was d situation. Okiro and Onovo had d police under their control. Ihejerika and later Minimah controlled d Army. These powerful Igbo’s could do and undo. Nigeria was in their pockets.

Rather than care about d poor Igbo chaps scattered all over d country, they were busy diverting billions of naira into their accounts at home and abroad. D 2nd Niger Bridge, they didn’t do. They shared d money. The Lagos/Calabar rail lines passing through 9 States, 3 of them in d SE, they were not bothered. They refused to pay d Chinese d Counter part fund. They shared d money. Enugu/Onitsha, Aba/PH and other roads of economic importance to their fellow Igbo’s, they abandoned.

Who is to blame? Who is marginalising d Igbo’s?

You had your chance, you bungled it. There was only 1 Yoruba minister worth mentioning at d time, Akinwunmi Adesina. He was in Agric. His budget was less than 1% while Emeka Wogu in Labor had over 10% for his ministry, Ayim had unlimited access to d treasury for d benefit of himself and family members. The poor Igbo guys meant nothing to him. If an Igbo becomes President tomorrow after Jonathan, will there be any difference? The Igbo man will marginalise his fellow Igbo people….. What’s your take ??