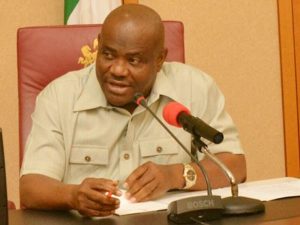 Wike also called on the international community to closely monitor the nation’s electoral process to stop INEC from manipulating the 2019 elections.

He spoke yesterday, during a courtesy visit by the German Ambassador to Nigeria, Dr. Bernhard Shlagheck, to the Government House, Port Harcourt.

“INEC does not have the capacity to hold free and fair elections. See what happened in Kano State. INEC says it wants to investigate the under-age voting that took place last week.

“Who gave the children the voters’ cards? We will not allow anyone to manipulate the electoral system of the country,” Wike said.

The governor said due to the failure of the All Progressives Congress (APC), the party plans to use INEC and security agencies to create crisis and manipulate the electoral system .

He said the cries over the order of elections by the ruling APC revealed their intention to manipulate the process.

The governor urged the German ambassador to ensure the Federal Government is committed to the development of the Niger Delta.

He said despite resources produced in the Niger Delta, the people have been denied access to infrastructural development.

Earlier, Shlagheck lauded Wike for his investments in infrastructural development.

The ambassador said he was in state as part of his familiarisation tour of the Niger Delta, saying he started with Rivers because of the importance of the state in the structure of the region.

He called on political stakeholders to work for the success of the 2019 elections.

Meanwhile, Rivers East Senatorial District has endorsed Wike for a second term on the strength of his performance.

Thousands of people from the eight councils of the senatorial district trooped to the General Yakubu Gowon Stadium in Port Harcourt yesterday where they sang the praises of Wike.

Member of the House of Representatives Representing Obio/Akpor Federal Constituency, Kingsley Chinda moved the motion for the endorsement of Wike by the district.  The motion was seconded by Majority Whip of the state House of Assembly, Evans Bipi.(the sun)