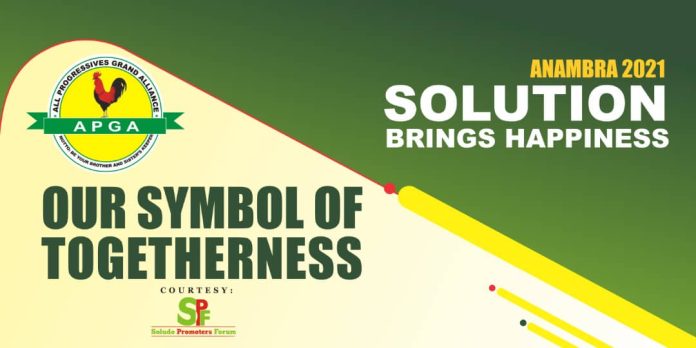 They made a mountain out of a molehill with their jaundiced prism of how a party flag bearer emerges in a political party. They poured undeserved vituperations on Governor Willie Obiano, the Dr. Victor Oye-led APGA leadership and Cee Cee Soludo in a bid to rave up unmerited sympathy and emotions to their veiled cause. They alleged that these great fellows have cut a deal and that there will be no primaries by APGA. They engaged all manners of spin doctors to spew rumours and lies that the party ticket had been compromised and sold after their massive inducements got them nowhere. And they told such lies with bareface bravadoes, threatening in the process, fire and brimstone. They should apologise openly.

Even when Soludo came out in the open to canvass for free, fair and credible primaries conducted under option A4, they stuck to their ‘tales by moonlight.’

Unfazed, vindicated and guided by democratic ethos, Soludo continued with his consultations of the rank and file of the party, stressing the need for unity, togetherness and cohesion as the party gears up for the November 6, 2021 governorship election, and as important ingredients for outstanding victory.

Amazed, many informed analysts have curiously kept pondering on how they came by the fantasy that there was not going to be primaries when such conditions were eloquently enshrined in the party’s constitution and the electoral law. It is obviously not ignorance, but perhaps the fear to come to the arena and compete along democratic standards. Another commentator derisively attributed it to the Soludo fear factor.

So now that the timetable and guidelines are out, what is next?

Our arm chair politicians are most likely going to continue to heat up the system as that appears to be their only trump card. They are yet to come to grips that power belongs to the people and not the money in their pockets nor their propensity to cause or engineer violence.

On the other hand, Cee Cee Soludo has mapped out and begun a massive state wide tour of all wards and local government formations of the party. In all these, he is buoyed and encouraged by the massive goodwill and love Ndi Anambra in APGA and outside of it are showering on him. Everywhere he goes, he listens, takes copious notes and offers Solutions that bring smiles to the faces of all. Men, women, boys and girls struggle to shake hands with him, hug him and assure him of their support. He inspires hope and pure joy.

Soludo’s campaign is premised on contestations of ideas and values with a view to improving quality of life. He frowns at the do or die brand of politics, notwithstanding the fact that there was a near fatal attempt at his life and those of his supporters, plus the unfortunate murder of three of his security aides.

Soludo has put the distress behind him and is working hard for victory at the primaries. Party faithfuls are massively lining up behind him in love and belief in his ability to win the governorship election, so he can consolidate the good works of Obiano.

On June 23, 2021, they will choose him to fly the flag of their cherished party in the November 6, 2021 governorship election, because they know he is the people’s choice, nay the choice of Ndi Anambra.