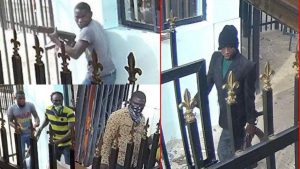 The Nigerian police on Friday declared wanted four of the gangsters who participated in the bloody bank robbery incident in Offa, Kwara state on April 4, releasing simultaneously their photographs, while in action.

The images provided were the clearest, since the incident exactly a month ago. The police said the Kwara State Government has also promised a N5 million bounty for information about the suspects.

It was the latest update provided by the police, following the arrest of 20 principal suspects earlier and the recovery of two Beretta pistols, bullets, phones and SIM cards of some of the victims.

“All the suspects are cooperating with the police in the investigation into the incident. Currently, some of the other gang leaders and principal suspects at large are being identified and their pictures obtained for further investigation”, Assistant Commissioner of police, Moshood Jimoh said.

Police asked for public help to apprehend the gangsters still at large and said they have also been placed on INTERPOL watch list and red alert.

“Other sister security and safety agencies are equally implored to arrest them and hand over to the nearest police station or formation across the country or avail the police with any information they may have or come across about these suspects”, Moshood said.
The police had earlier revealed the identities of 12 suspects who were arrested for alleged connection to the robbery in Offa.

Armed robbers stormed the community the afternoon of April 5, killing 17 people and raiding five banks. Eight police officers at Owode Division, Offa, were also killed in the attack, and the robbers made away with police arms and ammunition.
Prior to the arrest of the 12 suspects, the police had arrested seven suspects within the first two days of the attack, and made more arrests on later dates.

The police had earlier withheld the names of the first batch of suspects, saying doing so could jeopardise efforts to arrest the remaining members of the gang or/and threaten the entire investigation into the deadly robbery that had gripped the nation.
President Muhammadu Buhari and other Nigerian leaders have condemned the attack and called on the police to take immediate action to bring the perpetrators to justice.