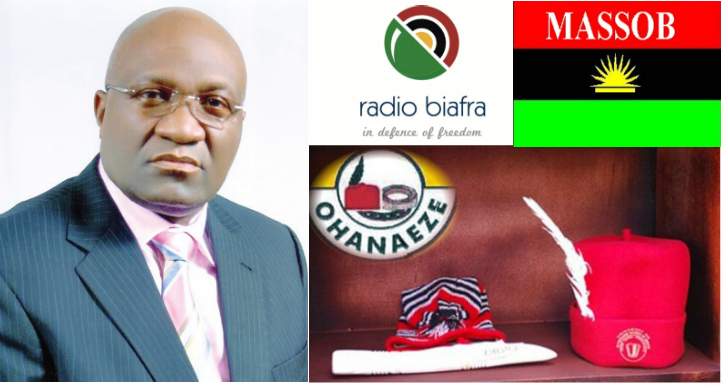 The Apex social-political organisation in Igbo land, Ohanaeze has condemned the killing  and  maltreatment  of  members  of   the Radio Biafra faction of Indigenous People of Biafra (IPOB) and Movement for the Actualization of  the  Sovereign State of Biafra (MASSOB)  by  Federal Government agencies.

The group also   called  for  a  true  fiscal federalism, saying  it  is  the only way to  solve  Nigeria’s political problems.

Briefing  newsmen in Port  Harcourt, Rivers State, yesterday, the President-General of  Ohanaeze, Chief  John  Nwodo  recalled  how  members of  the two agitating  groups  were killed  in  Anambra, Asaba, Aba and Port Harcourt, among others, and   some of  the victims  thrown  into the river.

According to him,   security  agencies  have  refused  to  release bodies of  killed Radio Biafra IPOB and MASSOB  members  to  their respective  families.

Nwodo wondered why  members of Radio Biafra IPOB and MASSOB  are  maltreated by security agencies, unlike members of  Boko  Haram, Odua Peoples Congress (OPC) and  Avengers, among others.

He said Federal Government’s  continuous   maltreatment  of  IPOB and MASSOB m embers  would   only  end up making  Biafra inevitable.

Nwodo  was  in Port  Harcourt   to  meet  with   the Igbo living  in the state  and   to pay  a  courtesy  visit  to Governor Nyesom Wike. He  said anything short of true federalism, where federating units are given a level of independence to  develop at  their own pace and contribute their quota to the centre would make the political crisis in Nigeria to linger.

He lamented  the   marginalisation of   South East and South-South in the areas of  political appointments, as well as  occupying  key positions in   the  security agencies. According to the President-General, the federal character principle has been grossly violated   in  favor  of  a section of the  country, noting that the Igbo   are  also qualified  to occupy key and sensitive positions  in the country.

The Ohanaeze Ndigbo boss insisted that Nigerians should write their own constitution, as against   the current  one  written by the  military.

“Today, under this makeshift federation, people are grumbling. We call for fiscal freedom in Nigeria for things to move forward,” Nwodo said.

He, however,  urged the Igbo to bring back their wealth and invest at home, to give the youths hope and sense of belonging. He also  lauded IPOB and MASSOB for going  about their  agitation peacefully.

,  pointing  out that despite the high level of insurgency in the North, no insurgent has been charged of treason or detained.

“What the Federal Government is doing is unfair, unfriendly and unusual. I, therefore, call on the northern elite to speak up against this unfair treatment meted out against the South. Time has come for the negotiation of the Nigerian federation and there is no going back.

“Some have declared war on the Nigerian state tearing our national flag to shreds and planting their own while embarking on mass killing of  our nationals and they are not arrested or detained. Others from the Niger Delta break pipelines and kill people and are rather called for negotiation and dialogue but for the  Biafran agitators, they are killed even when they are holding lawful meetings,” he  said.

The organisation,  whose  new Executive  was elected on January  10, 2017 and  led by Chief John Nnia Nwodo,  had earlier visited Lagos and Abuja,  two cities that have largest Igbo  population outside the seven Igbo dominated states. The states include,  Abia, Anambra, Delta, Ebonyi, Enugu , Imo and Rivers.

Indigenous People of Biafra (IPOB) has insisted that it wants Biafra restoration and not Igbo presidency as agitated in some quarters.

The group noted that any Igbo man or woman that presents him or herself as a presidential candidate of any party will become an object of public ridicule. It added that it no longer talks about the Igbo alone, but Biafrans beyond the Igbo speaking parts of the South East and South South.

The Head of Directorate of State (DOS) of IPOB, Mr. Uchenna Asiegbu, in a statement yesterday, warned Igbo politicians who were going round seeking support for either 2019 or 2023 presidency to desist from it or be ready to face the music.

“We are aware that some Igbo politicians are working tirelessly to impose their master in Abuja on our people, by defending Muhammadu Buhari. They say his administration loves and favours our people, we are not worried because they are defending their office and the little crumbs they are getting from Abuja.

“Therefore, we warn those calling for a president from Igbo extraction to beware because Biafra is at the corner and we are not interested. The Igbo elite have disappointed the entire race since after the civil war.

“Very soon, those saddled with the attitude of a governor and a minister will no longer be considered serious players or relevant in the scheme of unfolding events that actually matter in the lives of our people.

“There will be no election in Biafraland, not just in Igbo speaking territories but all across Biafraland in 2019 because enough of the same old, discredited, washed out and corrupt individuals recycling themselves in political office year after year with nothing to show for it.

“Biafra is on the verge of being restored and we won’t trade it for anything in the world, not even an Igbo presidency of the United States of America. Very soon, the world will understand how serious we are about Biafra. People should relax and watch events as they unfold,” Asiegbu declared.

Meanwhile, a faction of the pro-Biafran group known as  Customary Government of the Indigenous People of Biafra (CG-IPOB)  has disassociated itself from the statement credited to Emma Powerful that IPOB would never be part of Nigeria politics and cannot support Anambra State election.

The group, in a statement signed by its Director of Information,  Ndubuisi Anaenugwu in Onitsha yesterday said  it has increasingly become necessary to reiterate that IPOB stands for ‘Indigenous People of Biafra, and there are about 70,000,000 of these indigenous Biafrans living everywhere across the globe.

“All of these people are referred to as indigenous persons of Biafra. The public should, however, note that the IPOB being referred to by Emma Powerful are people who pay allegiance to a company called IPOB Limited, registered in the UK.

The Customary Government of IPOB being administered by Anthony Aniebue under the leadership of Retd Justice Eze Ozobu and Dr Ikedife has been in the Federal High Court, Owerri with the government since 2012 and the case is still progressing with positive results.

“But the whole world will understand how massive IPOB is and the yearning of ordinary people for freedom before 2019”.

“These Igbo political contractors parading themselves as some sort of an elite, are endlessly strategising on new supposedly beneficial political permutations to no avail”.

“Every one of these politicians always have one spectacular move or strategic maneuver that will turn the Igbo fortune around but in the end nothing ever materialises. Same old Abuja slaves, same old story, so there is nothing new for us to reckoned with”

“As the British would say, “no brainer”. Thereby warn Biafrans choosing president  of Nigeria from Igbo extraction is like taking purgatory than heaven, darkness than light, hope than despair. We are IPOB, we exist solely for Biafra restoration, nothing more nothing less. Igbo presidency would not solve anything, instead it would make matters worse”.

“Even the Goodluck Jonathan administration was considered more beneficial to the North than any part of Biafraland. Jonathan did not complete one major landmark infrastructural project anywhere in Biafraland but he built a modern railway line between Kaduna and Abuja in the hope that the North will love him, which never happened. That is how Biafran politicians behave” Asiegbu stated.

“The neglect of Biafraland by Goodluck Jonathan tells you even Igbo man enter there as president of Nigeria the person will stand with the north, you need to know about these politicians and their mindset. Our people believes in charity always begin in the North and that is why they are in the fine mess they find themselves in today’s Nigeria politics” he stated

“Biafra is on the verge of being restored and we won’t trade it for anything in the world, not even an Igbo presidency of the United States of America. Very soon the world will understand how serious we are about Biafra. People should relax and watch events as they unfold,” Asiegbu declared.