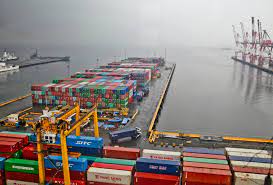 The process for the concession of Onitsha River port which is currently on going may be completed in the first quarter of next year when the full operations will commence.
The Onitsha Area Port Manager of  National Inland Waterways Authority, (NIWA) Mrs. Queen Uba, stated this at the Onitsha River port complex saying that the commencement of haulage operation at the River port will soon commence at Onne port, Portharcourt, Rivers State.
The Area Manger flanked by the Port Manager Mr. Baba Adams Spencer, in a briefing said that once the barge started coming  from Onne, the port would be viable and cheaper for businessmen to bring their goods from Onitsha River port.
Spencer said: “since inception of Clarion Shipping operation in the port, all containers were transported by road and now that Connect Rail Services limited has come up with a better and improved  option via the use of barge, it is a welcome development as it tends to promote transportation on our waterways. Much more than this, the operational activities at the port will be increased and will equally serve as revenue booster to the authority”
“On this basis, the presence of Clarion Shipping and Connect Rail Services at the port if synergized will promote commercial activities and attract more investors”.
She expressed satisfaction with the effort of the NIWA MD in ensuring a functional  Onitsha River port.
Uba said the concession which process is going on now, when completed, Onitsha port will generate revenue for the government and create employment to the unemployed youths”
“The lagos, onne, among other ports will be decongested and goods transported to Onitsha at a cheaper rate”, she stated.