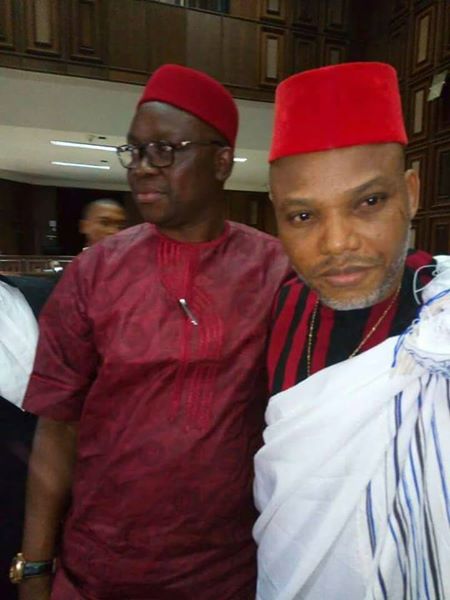 It is a great pleasure to reach  your esteemed self through this medium. It became necessary at this critical time of the year when  governorship electioneering campaign is  set to commence in my darling state Anambra. I could not have reached you through no other means than the open letter having failed largely due to the high walls erected by over zealous inner caucus members of your group IPOB. I was also denied your telephone contact by disciples and apostles with Baltic claims of guards almost always in the habit of shielding you away from suspected people of opposite stance.

Mazi, I sincerely write you this minute, firstly, to congratulate you on your dogged effort to give Ndigbo a true sense of belonging in the burgeoning political irrelevance since 2015 general elections, unfortunate era of political blunder witnessing  majority of our people who believed Dr Goodluck Jonathan was Azikiwe of the erroneous moment. when all the eggs laid in one rickety basket got smashed and the catastrophic aftermath.

Through  unpatriotically orchestrated media onslaught against the Federal Government of Nigeria, Mazi you have overwhelmingly succeeded in rejuvenating the centurion call to end the brazen marginalization of the Southeastern Nigerian. Now, powers that be are looking eastwards and paying greater attention to our needs, yearnings and aspirations as legitimate constituent members of the federation. Events of the moment have objectively rekindled the fire of brotherhood once lost amongst Ndigbo, that it appears we are speaking undoubtedly in coordinated voices of late.

Much as I would like to continue pouring sincere encomium on your recent profound achievements as an activists(because I don’t know you as a separatist) permit me to beckon your attention and  redirect your focus on issues capable of erasing the hard earned and wildly celebrated accolades enrooted in the struggle to better the lives of the people of Igbo origin.

while in London championing the Radio Biafra activities, Mazi your stint in broadcast greatly influenced the thoughts and lifestyle of your audience who quickly keyed into your laudable project and rendered massive support in kind and cash for the IPOB cause. Critics had posited that It was vulgarity and hate speeches on Radio Biafra that shutdown Igbo elites and revered intellectuals interest in the IPOB cause. This was evident when you were thrown into jail, awaiting trials.

Mazi,  I remember with nostalgia in 2013 when the Radio Biafra transmitter meant for Enugu was procured and you were shopping for the Director, you got connected to me through one Lady Rita Anigbogu your  former deputy (now Leader of MOBIN) who was a strong member of Igbo cultural ambassadors in Lagos. Severally,  you engaged me on phone urging me to get in involved in Radio Biafra activities, even proposed that I handled the Enugu Station,  which I declined after listening to your live broadcast via links you sent. Obviously, I  was quite uncomfortable with your  confrontational mannerisms as carelessly exhibited on air.

Unarguably,  the self- determination gospel  was clear  but the approach and methodology was  uncouthly, the style archaic, and the struggle a hard buy. Soon, it became a battle for survival, the long arm of the law was visited on you, and co travellers. Many of us though not comfortable with your style began to cry out for your freedom. I still recollect and vividly too a YouTube video that went viral demanding for your release. Yes I had to make the demand to persuade a fast tracked litigation processes (see Anambra APC GUBER ASPIRANT CALLS FOR MAZI NNAMDI KANU RELEASE on YouTube). Eventually, you were released on stringent bail conditions as it were, but you have thrown caution in the wind and relapsed into your stereotyped style of agitation.

Mazi,  you should know by now  that Ndigbo have risen in demand for equity and  freedom from the firm grip of injustices meted on the region by past and present political leadership in Nigeria. Also,  You should  know that Ndigbo cannot settle for another civil war because we are yet to recover from the last mortal combat that sucked innocent bloods. You should know that in politics, it is better to dialogue than to fight.

Demanding for ‘Referendum’ that is presently not enshrined in the Nigeria constitution cannot be attained without due dialogue, and enduring intellectual gymnastics cum political persuasions. You should know by now that the crowd you are talking to at every rally cannot lobby for the attainment of the set goals. They  know nothing more  than  ‘give us Biafra. Yes they sleep it, walk it, talk it and eat it but cannot provoke strategical and tactical means of achieving it.
You should know that majority of your fans who now claim IPOB membership need to be given the right orientation for it has become clear to everyone that they are ignorant of what referendum is and the procedural approach. You should know that character attributes and dispositions of your fans and fanatic followers are getting issues hugely complicated. It’s high time you called them to order and let them know what you know.

Mazi, when you told your fans and fanatic followers to boycott elections in Anambra, and they went about town shouting “no election  does that not tell you what lies ahead is defeat against the original plan, against the struggle , against the dream of a better Nation devoid of injustices, inequities, and unfairness. Don’t you think your strategy this time will set you against the rights of people supposedly being fought for? Don’t you think your inability to step down  from the emperor stool  and dialogue with relevant Igbo associations, think thanks ,elder state men, Leaders of thoughts, seasoned legal luminaries, traditional rulers,  clergymen, would give a clearer direction?

Truth be told , your fans and fanatic followers need to be enlightened on the best and surest way to make the dream of a better nation possible. It is not late to call them to order and explain better in the language they understand. No one is more Igbo than the other. No one is more BIAFRAN in spirit than the other. There is no family in Igbo land without a scar of Nigeria/Biafra Civil war. Call your ardent  followers to order. Civil disobedience is mostly better  observed and or practised by civil minds!

I hope that this letter will get to you  before the commencement of  electioneering campaigns in Anambra this September. I’m quite optimistic your fans and unrepentant followers have their benefactors in the race for Guber seat. Surely, they will do the needful to remain relevant, in the general scheme of things.

God bless you for reading this letter from a core BIAFRAN in Nigeria.