OurMumuDondo Movement has concluded arrangement to launch an initiative tagged -OCCUPY INEC.This initiative is targeted at enhancing Voters’ participation in the democratic process in Nigeria and to demand for the extension of the Continuous Voter Registration(CVR) exercise by Independent National Electoral Commission(INEC) in Nigeria.The Initiative to occupy INEC Office in Abuja ,Anambra and other States in Nigeria will be spearheaded by The President Of All The Frustrated Nigerians-Charles Oputa(AreaFather) and many other Young Presidential Aspirants . 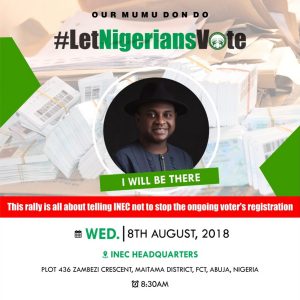 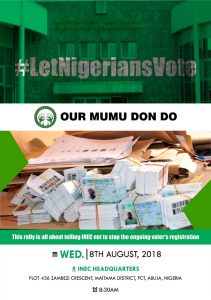 The Movement had noted that there has been an upward surge in the number of Nigerians acquiring their Permanent Voter’s Card since 2003. This trend usually graphics the interest of voters in participating in elections in Nigeria. Available statistics show that the number of registered voters in 2003 was 60Million, 2007 was 61.5Million, 2011 was 68Million, and 2015 was 68.8Million registered voters. While there has been a consistency of an increase in the number of registered voters since 2003 up until 2015, the rate at which Nigerians have been trotting to the nearest CVR center around them since January 2017, has been remarkable. This ongoing exercise will probably record the highest number of voters ever recorded in four years in Nigeria.The Movement further stated that the ongoing Continuous Voter’s Registration exercise, however, stands threatened by the short notice of the Independent National Electoral Commission (INEC), to end the registration by mid-August. The announced deadline by INEC contradicts PART III, Section 9(5) of Nigeria’s Electoral Act, 2010, which states that “The registration of voters, updating, and revision of the register of voters under this section shall stop not later than 60 days before any election covered by this Act.” The announced deadline, therefore, is inconsistent with the extant Electoral Act, 2010. 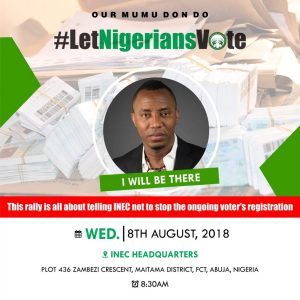 The OurMumuDonDo Movement, in collaboration with visionary young presidential aspirants under the Presidential Aspirants Coming Together (PACT) initiative, and concerned Civil Society Organizations, believes that by virtue of PART III, section 9(5) of Nigeria’s Electoral Act, 2010, the deadline announced by the INEC is inconsistent with law and unacceptable to Nigerians.

To express our disapproval of this move, therefore, we have decided to commence a three-day nationwide protest on Wednesday, August 8, 2018. This protest will be organized and led by the OurMumuDonDo Movement at the headquarters of the Independent National Electoral Commission in Abuja, and in other cities in the country. Partners and members of the public living in other parts of the country will also be urged to participate.

The focus of this action is to demand that the Independent National Electoral Commission (INEC) continues the Continuous Voter Registration (CVR) exercise until December 14, 2018. The proposed extension by the OurMumuDonDo Movement will allow many Nigerians who are yet to register for the Permanent Voter’s Card to do so without further ado.