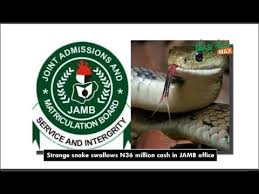 Staff of the Joint Admission and Matriculation Board, JAMB, were on Tuesday morning surprised when the senator representing Kaduna Central, Shehu Sani, stormed their office with anti-snake venom and snake charmers, after a staff claimed a missing N36 million was eaten by a snake.

JAMB Registrar, Ishaq Oloyede, went into rounds of laughter when the lawmaker presented him with two packs of anti-snake venom and offered the services of two snake charmers to fish out snakes that swallowed huge amount of money.

The exams board said it suspended the staff, Philomena Chieshe, at its Makurdi office following the bizarre claim.

In reaction to the development, the senator visited the JAMB headquarters to ascertain the truth of the matter and to lend his “assistance”.

“The reason for my presence here is in response to the story that a snake swallowed about N36 million. It is my concern that such a huge amount of money is reported to have been swallowed by a snake. I believe the contribution I can make is to bring snake charmers from my constituency to the JAMB office to help them fish out the snake or weed out snakes from their premises,” Mr. Sani said.

“If a snake can actually swallow N36 million one day we may wake up in this country to see that a snake has swallowed our foreign reserve or it has swallowed money that was gathered in the TSA.”

Mr. Oloyede continued his laughter and insisted on taking photograph with the unexpected gift.

One of the snake charmers, Tasiu Abdulrasheed, who claimed to have been a professional snake charmer for up to 20 years, said he has never encountered a money-swallowing reptile.

JAMB spokesperson, Fabian Benjamin, said the board is dealing with more frivolous stories like Ms. Chieshe’s.

“There was even a case in Nasarawa when a staff claimed that on his way to come and submit the scratch card, he had an accident and the car got burnt with the scratch cards,” he said.

Shehu Sani with JAMB Registrar, Ishaq Oloyede Shehu Sani with JAMB Registrar, Ishaq Oloyede
“The cards have numbers and when we checked we found out that those cards were used. There was another staff that said his signature was forged. He agreed that it was his signature but he wasn’t the one that signed and did not collect the scratch cards. We have many issues like that but all of them have been queried, they appeared before the disciplinary committee, they were interrogated. A report has been written. Once that report has been approved, we will be commended for their dismissal and prosecution.”

He advised Nigerians against trivialising the issue.

“We are not ashamed of whatever because Nigerians are turning it into a joke. It’s not a joke. We should be surprised and we should weep for this country that people could be that mischievous. The effrontery of someone saying a snake could swallow money is something that should disturb us.”

He added that the accused staff is currently undergoing disciplinary procedures and would be handed over to security agencies after the minister’s approval.