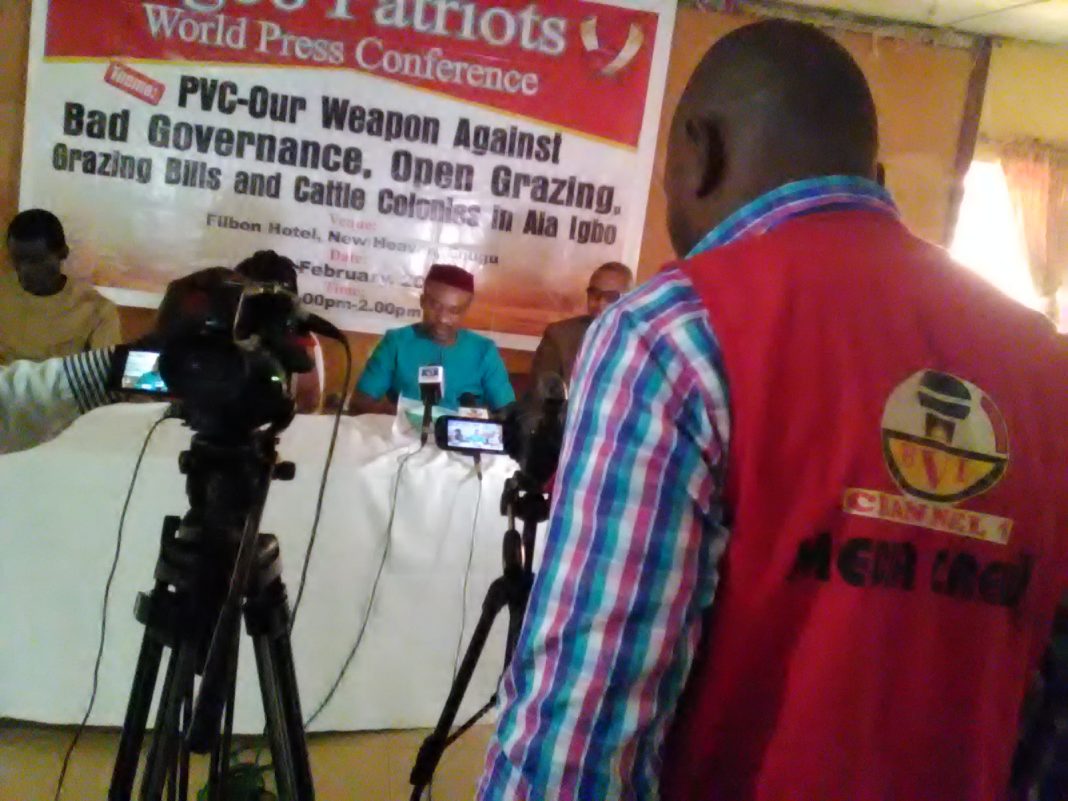 A new Igbo group has emerged to fight for the welfare and well- being of Igbo people through good governance laced with transparency ,probity and accountability.The group-The Igbo Patriots in a world press conference signed by the Coordinator- Obumneke Okafor and forwarded to BVI Channel 1 Newsonline advised the Assemblymen and the Governors of South Eastern States to enact anti grazing and cattle colony laws as a matter of urgency.The group which is non partisan announced that they are representing the interest of Ndigbo across the globe and has commenced the collection a million signatures of Ndigbo against Cattle Colony or Grazing Reserve and Call for Prohibition of Open Grazing in Alaigbo.

Igbo Patriots noted with great concern the abysmal performance of Ndigbo in the ongoing voters registration exercise as shown in the table below .

The group called for change of altitude and advised Ndigbo to flood the INEC Voters Registration centers throughout Alaigbo as the efficacy of Voters Card is more effective than Bomb.Addressing the World press conference at Filbon Hotel in Enugu, the Coordinator of the Igbo group, Obumneke Okafor, noted, “PVC is the only legitimate weapon through which you can participate and influence the electoral process by electing true representatives who will understand the yearnings and aspirations of Ndigbo as a people.”Okafor who was flanked by his Secretary,Arthur Nwakanma, and five others, said,“Ndigbo should take time away from their shops, markets and offices, avail themselves of the opportunity and get registered and collect their PVC. It is your civic right to vote and be voted for. Do not sell your vote because your vote is your power. And ensure that you vote on all the elections and insist that votes are transparently counted,recorded and announced.

In a Concluding message,Rita Anigbogu,One of the Leaders of Igbo Patriots told BVI Channel 1 Online Reporter that the time of reckoning has come.She made it clear that the Igbo people will use the Power of Voters Card to remove any Politician that goes against the aspiration of Ndigbo and that efforts are on top gear to mobilize the masses against internal conspirators .