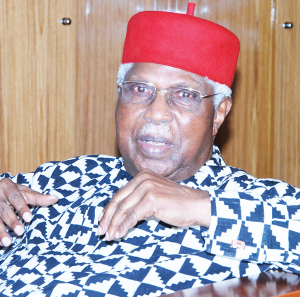 Led G-34, a collection of patriots and eminient statesmen to confront Late Gen. Sani Abacha on his self succession bid.

Called for a constitutional provision recognising MKO Abiola, and installing him as Nigeria’s President.

Provided leadership for the transmutation of G-34 into the People’s Democratic Party.

Remained faithful to the cause of the party till death inspite of failure to obtain the support of party men and women for his presidential ambition.

With a bachelor’s degree in architecture and city planning and a master’s degree in urban planning. He also earned degrees in sociology, history, philosophy and law from the University of London. He later proceeded to obtain a Ph.D in architecture from the University of Strathclyde, before gaining the BL (honours) degree from the Nigerian Law School. Arguably one of  Nigeria’s most educated politicians ever, with two first degrees and two Phds. He was the intellectual center for the political structuring of modern Nigeria.

A tribunal set up to try him by the Buhari/Idiagbon military junta in 1984 returned the following verdict:

“Dr. Ekwueme left office poorer than he was when he entered it, and to ask more from him was to set a standard which even saints could not meet.”

Yet as is with life for every mortal…..the sun sets.

Adieu Sir, you served with heart and class, and you wrote your name in gold.

May the good Lord grant you peace. Amen.