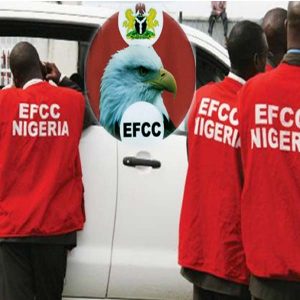 A MILD drama played out between the Chairman of Innoson Group, Chief Innocent Chukwuma and the Economic and Financial Crimes Commission, EFCC, yesterday, as the agency tried to arrest him in Enugu.

The EFCC claimed that Innoson staff tried to stop Chief Chukwuma’s arrest by the blocking his residence with trucks but EFCC operatives overcame the hurdles and arrested the business tycoon, who accused a tier-one bank of being behind his arrest. Chukwuma, who spoke with Vanguard while in EFCC custody in Enugu, yesterday, said the bank owed him undisclosed sum of money of which a court decided the matter in his favour “but instead of the bank paying me my money, they are using EFCC to intimidate me.” He promised to give details of the transaction and his encounter with the EFCC, once he was through with the agency. He was arrested yesterday, at about 11:00 am at his Savage Crescent, GRA Enugu residence where his staff allegedly put up resistance against his arrest but EFCC operatives finally had their way and whisked him away to their Enugu office. EFCC’s Media Officer in Enugu, Mr. Chris Oluka, who confirmed his arrest in Enugu, said there was resistance by the business mogul before his arrest. “He did put up some resistance by using some trucks to block our way to his residence but we finally arrested him,” said Oluka. The EFCC officer added that Chukwuma was still being kept in the Enugu office as of 3:30 pm but would be taken to Lagos before the end of the day. Spokesman of Innoson Group of Companies, Mr Cornel Osigwe, decried Chukwuma’s arrest. He told an online newspaper that “his arrest is in connection to the ongoing case he has with the bank.” Claiming that Chukwuma was accused of jumping bail, Osigwe wondered how someone who was never invited by the EFCC much less being arrested would be accused of fleeing from the law. Innoson Group has accused the first tier bank of being indebted to the auto manufacturing company to the tune of N8.5 billion in a series of damages stemming from illegal service deductions by the bank. An initial fraud case brought against Mr. Chukwuma was withdrawn earlier this year. But the Attorney-General Abubakar Malami revived the case at the Federal High Court in Abuja as the bank maintains its allegations that Chukwuma manipulated bank and shipping documents to obtain tax waivers from the Nigerian government. Why we arrested Innoson MD – EFCC However, EFCC Head, Media and Publicity, Mr. Wilson Uwujaren, in a statement gave reasons the anti-graft agency went after the business man. He said: ‘’His arrest followed his refusal to honour invitation by the Commission having earlier jumped an administrative bail granted him in a case being investigated by the Capital Market and Insurance Fraud Unit of the Commission’s Lagos office. ‘’Chukwuma rather than honouring invitation by the EFCC, mobilized six truckloads of thugs pretending to be staff of his company to his residence, where they manhandled EFCC operatives. It took reinforcement from the Enugu office of the EFCC to effect the arrest of the industrialist who is currently being grilled by a team of investigators.’’