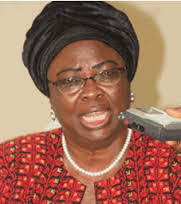 Wife of Nigeria’s First President Nnamdi Azikiwe, Prof. Uche Azikiwe, has insisted on the indivisibility of Nigeria, a position that is contrary to that of the Indigenous People of Biafra (IPOB).

While IPOB members in South East are insisting on leaving Nigeria, Nigeria’s first First Lady is eulogising her late husband’s contemporaries for their sacrifice for the unity of the country.

She insists on the unity of Nigeria and commended late Chief Obafemi Awolowo, Alhaji Ahmadu Bello and others, who sacrificed a lot to build Nigeria.

She urged Nigerians to remain united in honour of the memories of the nation’s founding fathers.

Her position is contrary to the rave in the east where some youths are clamouring for the disintegration of Nigeria.

Azikiwe made the plea on Monday at the Federal University, Ndufu-Alike, Ikwo LGA of Ebonyi during the institution’s 2nd Convocation Lecture with the theme, ‘National Reconciliation and the Role of Universities’.

According to the nation’s former First Lady, Azikiwe was in the forefront in the fight for the unity of Nigeria.

“The country should not be allowed to disintegrate during our time because if it does, my husband and his contemporaries would turn in their graves.

“These founding fathers sacrificed a lot for us to be one irrespective of their differences, and this should make us to collectively find solutions to the problems threatening to disintegrate us,” he said.

Mrs. Azikiwe callled reconciliation among various warring groups in the country to ensure the desired peace.

“We should call upon God in solving the problems and seriously address issues of injustice, inequality, among others which threaten our corporate existence as an entity.

“The nation’s political class should also be called to order because we gave them the mandates to lead us but unfortunately, they are not doing so rightly,” she said.

“The universities should thrive to save the country from the obvious and present dangers promoted by gaping sense of hopelessness while returning us to the part of national reconciliation and growth.

“Universities by their nature, are supposed to be places for research, growth of ideas and solution oriented contributions for advancement of mankind,” he said.

He noted that to achieve these goals, the universities should be adequately funded, well managed and intellectually honest.

“I am a product of the university education both in Nigeria and United Kingdom but must confess that most of them in Nigeria have presently fallen below the required standards.

“Universities are staffed and grown by products of primary and secondary schools and if the teaching quality in these schools is poor, the quality of students and graduates of our universities would be correspondingly low,” he said.

He noted that entrances into universities and the West African Examination Council (WAEC) qualifying examinations have been characterised by massive examination leakages and cheatings.

“I taught constitutional law briefly in a Nigerian University and appalled that some students could not even express themselves in readable English and therefore, lack the wherewithal to crystallize answers to basic examination question,” he said.

Prof Chinedum Nwajiuba, the University’s Vice Chancellor noted that the lecture was its contribution to solve nagging questions of unity confronting the country.

“We would continue to produce students who would contribute in the development of the country in all sectors while ensuring the realization of the dreams of our founding fathers,” he said. (NAN)